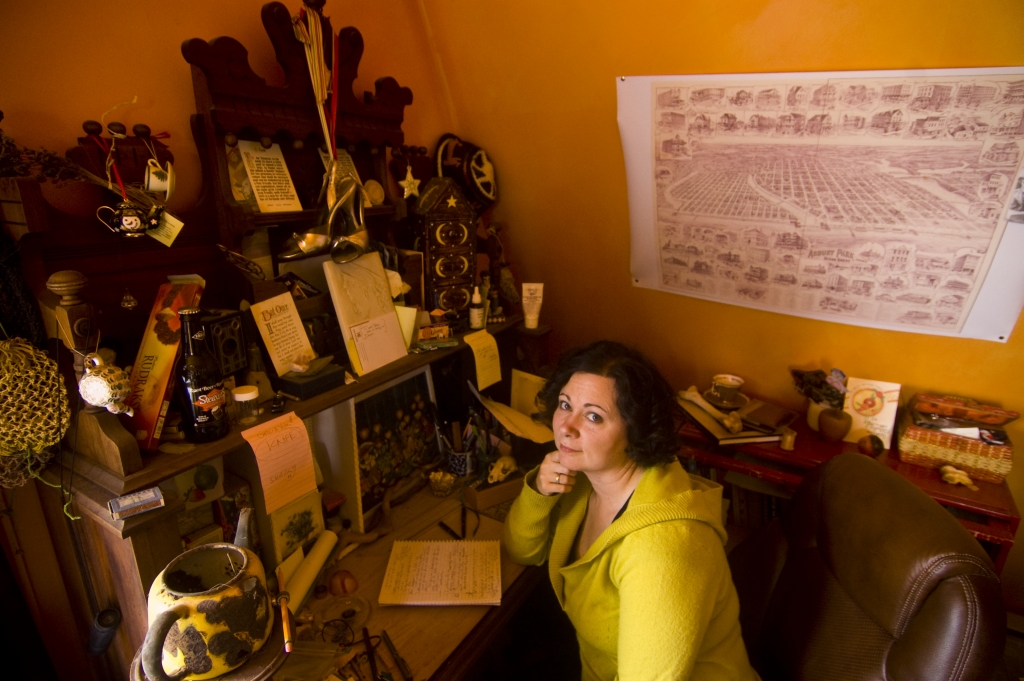 This novelist discovered a home for writing in rural Nova Scotia

Scots Bay, Nova Scotia isn’t easy to find on a map. The quiet community of less than 200 sits slightly off the beaten path, a few kilometres north-east of the Annapolis Valley, just west of Blomindon Provincial Park, jutting out into the wondrous Bay of Fundy.

Even today, with the world at our fingertips, the internet still won’t tell you much about the eighteenth-century Scottish settlement. There is a short Wikipedia entry, a smattering of photographs on Flickr, some satellite imagery, bits of genealogical data and a few local business and real estate listings.

In fact, if you google Scots Bay, you are likely to bring up more information about its most celebrated resident—writer Ami McKay—than the village itself.

Ironically, and unlike the many families that have inhabited the tiny harbour-town for generations, the multi-award-winning author is not indigenous to the area.

Born and raised in rural Indiana, McKay and her husband Ian first toured the region in 1999, purchasing property there the following year. The 170-year-old “fixer-upper farmhouse”—once the home of a renowned local midwife—would later become both the inspiration and the setting for her bestselling debut novel The Birth House.

“Something about the place captured me,” she shared with the CBC after the book’s release in 2006. “It felt like I was standing on firm ground for the first time in a long time.”

That newfound stability produced more than a Canadian literary masterpiece, however, with McKay soon birthing—and later home-schooling—two young children of her own.

Still, despite the demands of domesticity—or perhaps because of it—her creative composition continued; first with Jerome—written for a local theatre company in 2008—and, more recently, with her latest labour of love, The Virgin Cure.

McKay says that, all accolades aside, some credit must also be given to her studio, an oblong, 10’ x 15’ loft-style space covering half of the upper-tier of the property’s decade-old barn.

“I write almost exclusively out there,” notes McKay. “The farmhouse is our home and family living space and it’s very important for me to keep those two elements of my life separated as much as possible.”

With slanted ceilings and a skylight, the room is both snug and spacious at once, allowing for the author’s preferred natural lighting. Brightly-coloured walls (“orange sherbet”) and a brilliant burgundy curtain help to offset the winter greys. Near a small bookshelf sits a vintage tea table, adorned with a myriad of personal mementos.

The centerpiece, however, is McKay’s desk; a gutted Victorian-era Pump Organ.

“It belonged to my great Aunt in South Bend (Indiana). When I was little and learning to play the piano she would ask me to perform songs from the turn of the century and I’d have to pump and pump my feet over and over just to get the bellows to move.”

The instrument then followed her, first to Chicago, and then later to Nova Scotia as she plied her trade as a musician and music teacher.

“It finally fell apart and no longer worked properly,” she recalls with a sigh. “It was too expensive to repair, but I didn’t want to get rid of it, so we transformed it into my writing desk. It’s the perfect size to sit at, and there is a decorative wooden box on the top where hymnals and music books were once stored, where I can place my pens, pencils and paper.

“And,” she smiles, “the organ pedals actually still function, so I can even get some exercise in while I work.”

If her legs and feet don’t tire from the toil, then her hands and arms still suffer, as nearly all of McKay’s creative initiatives are undertaken in classic, long-hand form.

“I’ll start out with a fountain pen, before transcribing the day’s work onto the laptop, which goes with me wherever I go.”

A few feet over, sliding glass doors open to a balcony, overlooking an array of large Spruce trees.

“Being up there reflects a lot of my favourite spaces as a child,” she explains. “I used to take books up into the trees around my home and stay up there for hours at a time reading. It was my own little universe, and in some ways, I have recreated that here.”

And while the barn enjoys many of the contemporary conveniences enabled by electricity, there is no access to the online world.

“It would be far too distracting,” admits McKay, “and I’d probably never get any work done.”

Though she enjoys her silence and solitude, the author concedes that the process is not without its pleasantry of diversions.

“I often listen to music while I’m working, and I think that you can hear that influence in my writing.”

Her eighteen-year-old son Ian Jr., who claimed the other half of the site’s upper sphere to paint during the summer months, also muses to melodies.

“He’s so cute,” grins McKay. “He wears these headphones while he works and I can hear him humming along.”

At close quarters, the pair will sometimes compare notes.

“We get into these amazing discussions about our work and creativity,” she giggles. “He’s more than a son—he is now a part of my process.”

It is a process that has once more produced a compelling tale.

“I don’t think that either The Birth House or The Virgin Cure would have turned out the way that they did if I had written them anywhere else. It’s terra-firma for me, a familiar place, home.

“I’ve said before that there was something about this place that captured me. I hope, in turn, that I have captured it also.”

McKay confides that with months of touring the new book ahead of her, she is already dreaming about nestling back into her cozy cove.

“There is something special about my little corner of the world, something safe. And I like the fact that it isn’t easy to find on a map.”