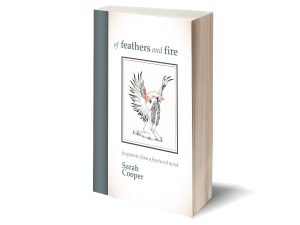 In the preface of Sarah Cooper’s debut book of poetry, Of Feathers and Fire: Fragments From a Fractured Mind, she advises the reader to prepare for an existential journey—an overwrought description common to young poets. Fortunately, Cooper delves into the murkiness of mental illness and heartache with language that swings deftly from slippery clichés to punches of brilliance, eclipsing what came before.

In her acknowledgements Cooper confides Of Feathers and Fire began as a journal entry and the intimateness of that vulnerability still clings to the page:

Her poems brush against the cringing embarrassment of lost love confided in an old diary and make us at home in the stomach-lurching company of quiet desperation. The discomfort is important; Cooper is guiding us through fragments of her internal collapse—it’s not supposed to feel good. And yet, with certain bittersweet lines of recognition, it can. “If I would like to stay off the floor / Now would be a good time to lie down,” Cooper says in “It May Be Safer to Sip a Guinness.”

These are the poems you read when the world seems dark, because Cooper has been there and with the right direction all things drift gently towards the light.

You shouldn’t love someone for their potential, / They will forever disappoint you with it. / Don’t fall in love with a dream, / It will never leave your bed

In Of Feathers and Fire Cooper mixes titled and untitled pieces, employs unpredictable page breaks and arranges her poems so that they spill into each other—it’s hard to tell where things begin and end and in the same cyclical and knotted way one faces the unnumbered days of grief or depression. But, there is hope here too. In the rousing “Here to Stay” she promises:

I will stand up / Brush the dust from my body. / I may have been lost for a moment, / But I was never gone. / I do not disappear

Fierce from the trek, Cooper’s arrival in her debut book is one of strength and resilience. Though fractured and at times indulgent, Of Feathers and Fire attains moments of clarity that will resonate with the deepest parts of you.

Of Feathers and Fire: Fragments From a Fractured Mind
Sarah Cooper
Penumbra Press

New Brunswick poet Sarah Cooper always knew her thought process was a little different than most.

“I have lines of poetry running through my head, but I wasn’t aware of it at the time,” says Cooper. “I always did well in my English courses but I didn’t write. I was determined I was going to be in sciences and that was going to be my life, but that wasn’t what I was made for.”

Until two years ago, she mostly ignored the poetry in her head—until she heard singer-songwriter Andy Brown perform during a particularly difficult time in her life.

Cooper speaks openly about her experiences with mental illness, specifically major depression and psychogenic non-epileptic seizure disorder, which she describes as, “your brain’s way of coping—except sometimes it does it wrong, and when you don’t need it. Your brain shuts down and you don’t really have control of your body anymore. For me, it looks kind of like a seizure, but some people, they just check out or they have tremors. It looks different in everybody.”

She often uses music to cope and Andy Brown was her go-to at that time; she was listening to his quieter songs as she fell asleep and his “peppier” tunes the rest of the time. His live set affected her so powerfully it inspired her to start writing.

“That day was a little spark that reminded me I’m made of fire, that I have that in me and to let it go, let it burn,” says Cooper.

She started writing down some of the ideas and phrases that were flowing through her mind. She’s careful to clarify that this process isn’t a coping mechanism for her—it’s just a way of expressing herself and her experiences. She started with a few journal entries but that tapered off quickly—journaling wasn’t for her. She wrote a poem a few weeks later, which she says, “wasn’t very good,” but she kept jotting down her thoughts and before long something clicked.

“Once I let the dam break and I started writing it kind of exhausted me because it was all of the time,” says Cooper. “So that was exciting, but also like, ‘I really want to sleep.’ But I just kind of went with it and it has settled down. It’s a little slower, now I know which ones I want to keep.”

Even so, she didn’t realize she was a poet until one quiet afternoon, while she was writing under a tree in a Charlottetown graveyard. As she was sitting there, the idea that she was a poet occurred to her for the first time, and it felt right.

A few months later, she went to a book launch in Charlottetown with a friend and ran into Penumbra Press publisher John Flood and PEI’s poet laureate Dierdre Kessler. At the time, Cooper had no idea who they were. After the launch they invited Cooper and her friend to a pub, where they chatted for a long time.

“Partway through the conversation, I did find out who they were. It was probably good that it didn’t realize. It happened so slowly that I found out how incredible their accomplishments were, but I got to experience how incredible they were as people before that. So I think that served as a much better foundation for us.”

Flood invited her to a house party he was attending a couple of weeks later and asked her to read some of her poetry while she was there. She read a few poems and Flood asked her to send him some more of her poetry by email. Flood and Kessler became mentors to Cooper and—Flood in particular—spent hours going over her poetry with her.

“There were suggestions and ‘what if you did this?’ and the sparking of creativity,” she says. “It was so uplifting and exciting and just beautiful. I feel lik

e I know what it’s like to be very well critiqued, because I fixed things but I never felt bad about myself.”

The next time she ran into John, he broached the possibility of publication and she agreed to send him her revised work along with some new pages. Again, Flood and Kessler went over the new pages, and although Kessler couldn’t be there in person, Flood and Cooper spent another five hours going over work. When they were done, Flood offered to publish her.

Her response was, “Okay.” She laughs as she talks about it now. “The actual response in my head was just a lot of loud noises, so I’m glad I just said ‘okay.’”

Now, she’s the author of a book of poetry called Of Feathers and Fire: Fragments From a Fractured Mind, published by Penumbra Press just a few months ago. But there’s a lot more to come.

“I definitely feel that with this realization that I am a poet,” she says, “this is my beginning.”