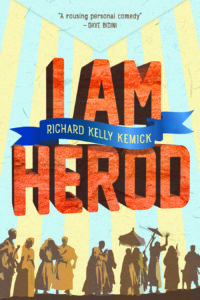 How was last summer? It probably wasn’t as unusual as Richard Kelly Kemick’s in 2017. That is the year he joined the Canadian Badlands Passion Play, an annual outdoor summer spectacle in southern Alberta. I Am Herod is his hilarious telling of the author’s experience with the production. His part? Herod, or as Kemick puts it, “one of the most slandered figures in Scripture (which is saying quite a bit considering the Bible’s cast includes, namely, The Devil).”

Kemick is a poet, humourist and journalist, but not a Christian. The vast majority of the people in the play are; in fact, their faith is a big part of the reason they are willing to give up their summer weekends to volunteer. However, there is a fairly wide spectrum of Christianity represented here, and we get to know people’s quirks and foibles as the summer goes on. Kemick identifies them by their Passion Play name only; it’s fun to imagine Baptizee 4, Thief on the Left Cross and, my personal favourite, Widow with Two Pennies, eating lunch together. We get to know others in greater depth: Jesus Understudy, who played Jesus last year but has been demoted; Gabriel, who entertains from his coveted RV with high-end Scotch; and the delightfully foul-mouthed Pilate (“how hard is it to read the motherfucking Bible?”).

Kemick also has a great knack for storytelling. I laughed out loud more than once at his descriptions of the mammoth job of organizing a mostly volunteer cast of hundreds. A typical example is his summation of the shrinking staging of one scene:

“What was once an elaborate montage of interpretive dance has become six minutes of twenty-two men shuffling in and out of various triangles, semi-circles, and rectangles. Our choreography is now reminiscent of a North Korean military parade, yet with neither the precision or fervour.”

All this could have been simply a voyeuristic exercise, but Kemick applies the lens to himself as well. He is disarmingly frank about his own demons, and tells his own stories with humorous honesty. In the end, I Am Herod is a very funny book with an underlying pathos and sweetness which I found quite moving.