Discouraged and disgusted by the fiery politics burning through the United States of America in November 2016, Scott Kelley turned inward at his writing desk on an island off the coast of Maine.

He deleted all the news apps off his phone. In the silence came the stories of his childhood, stories of the People of the First Light—stories from the same land, but a different identity. As he began to create, he did so not in the United States of America, but in the Wabanaki Confederacy.

Kelley had been working on a series of portraits of Wabanaki Elders and a separate series of animals living in the woods near his home. “One night, I was sorting through my picture files and a photograph of a bear ended up next to a photograph of a Mi’kmaq chief’s coat, and next to that was a rather dapper Penobscot gentleman wearing a top hat,” Kelley says.

“I pulled out a big piece of paper and 20 minutes later had drawn a bear wearing a top hat and the chief’s coat. I knew that there was something there, and by the time I did the painting of the rabbit smoking a pipe, the rest just fell into place. It happens, sometimes.”

He started to tell a story among the striking and strange images of a wet-nosed deer wearing beads, a hat and a cloak; a badger staring deep into the viewer while wearing a bright red-and-black cloak and a pointed hat; and through it all, a birch tree.

“The legends of Glooscap were writ large throughout my childhood, but to be honest, the story itself was an accident. I needed a place for the paintings to inhabit, and Glooscap—or at least my memories of Glooscap—just kind of popped up and I went with it.”

I Am Birch (Islandport Press) came to light. Birch talks to Beaver, Porcupine, Heron and many others, and each tries to alarm him with the same bleak fortune: a time is coming of great cold and darkness. The fear of chaos sweeps through the forest but Birch resists panic. He questions the animals, but none know the source of the rumour and none know it to be true.

“There is no coming time of great Cold and Darkness,” Birch concludes. “There never was.”

Kelley says in times like ours, when every morning trumpets headlines of a coming time of great cold and darkness, we can find strength in the different identity of the Wabanaki Confederacy. It bonded the People of the First Light: the Mi’kmaq, Wolastoqey (sometimes called Maliseet), Passamaquoddy,Passamaquoddy and Abenaki.

“That old alliance was crucial to their survival and over the course of centuries, it remained largely intact. They depended on each other and their coexistence was, so far as anyone knows, a largely peaceful one,” Kelley says.

“They must have been like a hive, the greater part of their days spent gathering enough protein to get through the winter. And they did this forever: the Passamaquoddy have what I believe is the longest running government in history, over 14,000 years of uninterrupted councils.

“We can’t even manage to go two years without feeling the need for upheaval. It is something we seem to have forgotten, in the modern age: we are all in this together; the needs of one pale against the needs of many.”

I Am Birch, which features rich, full-page illustrations that can be devoured by children, offers a more hopeful understanding of humanity. “Think about all the things we have been led to believe were a matter of life and death, and, hey, look—we’re still here. Humanity survived the plague, hurricanes, tornadoes, floods; I even survived Catholic military school. You either do, or you don’t. The world still turns, the sun still comes up.”

Author Peter J Clair was born in Elsipogtog, New Brunswick, now lives in Tobique and was likewise called back to the Wabanaki world. His novel Taapoategl & Pallet: A Mi’kmaq Journey of Loss & Survival was published by Chapel Street Editions.

The novel itself occupies two worlds. Taapoategl lives in the mid-1700s and Pallet in the mid-1900s. Taapoategl occupies a Wabanaki world rooted deeply in her culture and family. Pallet journeys into the wilderness of a world closer to ours, searching for an identity rooted in the past.

“Hopefully with the book, the reader will be encouraged to investigate the contribution of the Mi’kmaq and other First Nations and their generosity and contribution to the birth and existence of Canada,” Clair says.

The pages are sprinkled with Mi’kmaw words, fragments of voices from one of the original tongues spoken in the old alliance.

Another old language came dancing off the tongue of eight-year-old Ava Polchies as she sang traditional songs in Wolastoqey. At Wulastukw Elementary School near Fredericton, she learned about her Wolastoqey culture. And then, on the best day of her life, she met Luna the pony. Her grandfather, Billy Polchies, joined her for a memorable day.

Paul Lang directed a photo shoot of the grandfather, granddaughter and pony. He then created background illustrations; the photographed Polchies walk through a watercolour world of ducks, ponds, deer and trees.

Author Hélène deVarennes added words, written in French, Wolastoqey and English. She says the trilingual book honours the land we all share. “Because Indigenous children here are schooled in either French or English, this book is an acknowledgement that their language has value,” she says.

A Pony Day was launched at Ava’s school on the first day of October. The story bubbles with warmth. Ava has an ancestor named Josephine. In the book, a little girl named Josephine travels with her grandpa on her sixth birthday for an unimaginable treat: she will ride a pony for the first time. The story says:

Josephine looks at her grandpa. He does not seem to be joking. His eyes are not filled with stars and his mouth is not wide-open like when he laughs.

The creators of the book say its message is that all children love to imagine and need loving and joyful relationships with their extended family.

“A very wise Indigenous woman once told me that Indigenous peoples seem to always be historicized,” deVarennes says. “It is important to have storybooks featuring everyday activities for Indigenous children as well.”

As Josephine’s magical day draws to an end, the sounds of the ancient and modern worlds sing together. The story continues:

The trio of pony, girl and grandpa ride off together on the final page. In English:

A sweet wind and bursts of laughter float around Josephine and her grandpa.

And in one of the original languages of this land: 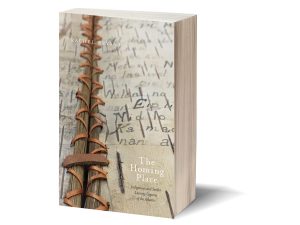