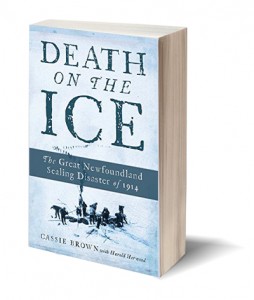 This reissue of Cassie Brown’s seminal non-fiction account of the 100-year-old tragedy is a well-timed (and crisply designed) reminder of just how narratively powerful and culturally significant this book is. The story of the men who perished on the ice when a party of 132 seal hunters were marooned, largely due to human error, has a solid and well-deserved reputation as a classic.

Because of Brown’s thorough research and well-paced storytelling, this account of the catastrophic events is both a page-turner and a chilling reminder of how callously and carelessly sealers (swilers) were treated by the industry, and what they routinely endured to earn some rare cash wages. Its continued life as a Newfoundland novel and a staple on the province’s curriculum is an articulate footnote to the current charged politics of the seal hunt.

It’s also worth noting that when Brown first published this in 1972, her publisher (Doubleday) insisted on Harold Horwood including an Introduction, so there would be a man’s name, a “real’ author, cited on the cover. Photos, appendices, and a codicil are included.