A History of Nova Scotia in 50 Objects 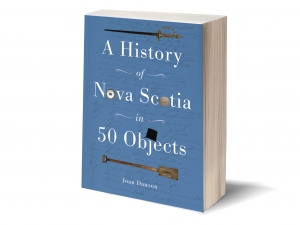 In the foyer of the Nova Scotia Archives building, this old iron printing press stands alongside a row of computers. In a few years’ time the computers will have become obsolete, replaced by newer models, and discarded. But this press will continue to be preserved because of the important part it played in Nova Scotia’s history.

From Gutenberg’s time in the fifteenth century onwards, texts have been printed on presses that allow multiple copies to be produced at ever-increasing speeds. While they have varied in design over the years, until recently, commercial presses all operated on the same principle: type was set, letter by letter, and transferred to the press where ink was applied, transferring the ink to the paper. […]

A printer named Bartholomew Green brought the first printing press to Halifax, from Boston, in 1751. While Green unfortunately died soon after his arrival, his business associate, John Bushell, took over his press and type and set up a printing shop on Grafton Street. It was here that the first newspaper in Canada, The Halifax Gazette, was printed in 1752. It was well received, and soon other newspapers sprang up to rival it in popularity. […] Numerous printers were working in the downtown area by the mid-nineteenth century, and not only newspaper publishers. The Halifax printing industry grew quickly: some printers were stationers, selling ruled ledgers and account books; some printed books; and some were booksellers.

One of Halifax’s early printers was John Howe, also from Boston, a Loyalist who established a print shop on the corner of Barrington and Sackville Streets in 1780. There, he published a newspaper, The Halifax Journal. Howe was the most successful of the Halifax printers of his day, and in 1801 he was appointed King’s Printer, responsible for printing official government documents. But it is his son Joseph, born in 1804, who is now remembered as one of Nova Scotia’s distinguished printers, publishers, and journalists, and this is his press.

The press was designed and patented in 1819 by John Wells of Hartford, Connecticut, and Joseph, who had established his own printing business, bought it in the 1820s from a fellow Halifax printer. It served him well. Marjorie Whitelaw summarizes Howe’s printing career in her book, First Impressions:

“On this machine Joe Howe, as publisher of The Novascotian, printed the editorials in which he developed his political philosophy; this was the very press on which the mighty battle for responsible government was argued and won.”

[…] Howe went on to a political career in which he stood up for the interests of citizens against the self-interest of officials. He was first elected as a member of the Assembly in 1836 and became speaker in 1841. He continued to write for The Novascotian and Morning Chronicle, and his editorials between 1854 and 1856 vigorously promoted the Reform Party’s efforts to achieve responsible government for the province. The highlight of his career was a successful campaign that made Nova Scotia the first of the British colonies to achieve this status.