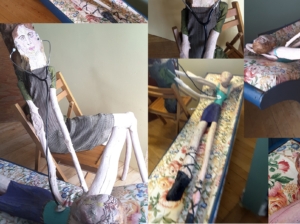 In a lobby of the Tupper Building, the seat of Dalhousie University’s Medical School in Halifax, a driftwood figure of a doctor with a stethoscope examines a resting driftwood patient. Dressed and assembled with folk-art inspiration, poet Carole Glasser Langille’s figures make up her installation, “What a Patient says to the Doctor and What the Doctor says to the Patient.”

Beside the piece is a notebook inviting passersby to write down what might be transpiring between Langille’s two emblems of medical care. Dr. Jock Murray has written that the patient was saying, “I’m feeling a bit stiff today.”

This is an installation that ran as part of Langille’s work as Artist-In-Residence with the Medical Humanities-HEALS program, an artistic effort administered through the Division of Medical Education at Dalhousie.

In April and May, Langille hosted a six-week, 10-person writing workshop for women who have had cancer or who were currently being treated for it. The course filled up so fast she committed to a second six-week series in June, which had a long waiting list.

“It was up to me how I wanted to use this residency as a writer,” Langille said.

Last year, she held a workshop for inmates at the Central Nova Correctional Facility. A workshop seemed perfect for the patient community.

“It is so moving to listen to the women in this workshop,” she said, “I look forward to going to this class. It’s very draining because it’s so intense, of course, but most workshops are intense, if you’re leading them right. And I have to make sure it’s engaging, as well.”

Originally from Brooklyn, New York, Langille has been teaching and publishing in Nova Scotia for over two decades, while collecting driftwood from the shores near her Black Point home. She’s an instructor of Creative Writing at Dalhousie and has been widely recognized for her work. She’s been nominated for the Governor General’s Award and the Atlantic Poetry Prize and, this year, nominated for the Alistair MacLeod Award for her stories, I Am What I Am Because You Are What You Are.

“In the workshop, the goal is not to produce a finished, beautiful piece of writing,” said Langille. She assigned a writing piece at the beginning of each workshop. Participants then read pieces they’d composed from the previous week. For the second session, Langille included the poem “Coda” by American poet Jason Shinder and asked the workshop to respond to it in prose.

“I don’t want this workshop to be only about cancer and illness, so I asked them to write about people that were important to them,” she said. “What is relevant about that poem is about reaching out to friends, and I think friendship is so important at all times, but it’s especially important when you’re going through difficulty.”

The responses were powerful. “I’ve cried, I’ve been so moved.”

Langille described the workshop as evoking feelings of respect and camaraderie. Women sharing about illness experiences that can feel isolating and lonely. While sharing can be a supportive experience, Langille guided participants toward personalized writing so that work could be even more meaningful.

“I say to write a piece that no one else can write but you. And to do that, you have to be specific,” she said. “The writing can’t be vague. Not just words like ‘joy’ or ‘kind’, but specific examples, be specific so we’re able to imagine your experience. The women all come for their own very different reasons but I do really want to establish that what they’re writing is important and that it’s helpful to everyone.”

Writing about illness is not only a pursuit of healing, but an artistic one, as well. Langille hopes that she can offer more workshops like these in the future.

“The response has been so positive, it’d be great if there was some funding for this on a regular basis. I really think it’s needed. There are other benefits for cancer patients, like free wigs or massages, but one woman in the workshop said, ‘I think we need to heal from many things,’ and I thought, doesn’t that say it all?”

Adria Young is a writer based in Halifax.