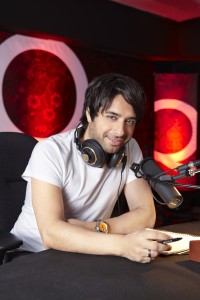 a long list of complimentary things to say about Halifax.

The host and co-creator of the national daily talk program Q on CBC Radio One and CBC Television has paid several visits to the city since his days touring with the folk-pop band Moxy Früvous.

He’s generous with his praise of Halifax’s welcoming vibe and vibrant art, music and theatre scenes. He even recalls, with apparent fondness, some “painful” late nights at Pizza Corner.

Ghomeshi will be visiting again, this time wearing his author hat and reading from his bestselling literary memoir, 1982 (Viking Canada), at the 19th annual The Word on the Street Halifax  National Book and Magazine festival on Sunday, September 22 on the Halifax waterfront.

1982 is a work of creative non-fiction that chronicles a year in the life of the then-14-year-old Ghomeshi, an immigrant from England with Iranian parents, as he struggles to create his own identity in the Toronto suburb of Thornhill.

The story weaves funny and poignant memories with ’80s music, as the young Ghomeshi discovers a passion for David Bowie, new wave style and an older woman named Wendy.

Although Ghomeshi had always wanted to write a book, he had his doubts during the writing that people would actually want to read it.

He says the most difficult part of the writing process was just getting started. “I write in spurts. I spend an hour or two putting words on the screen, then I spend the next few hours looking at what I’ve got and workshopping it,” he says. “But I learned that it’s really important to let that burst happen in a really unfiltered way.”

The new executive director of The Word on the Street, Genevieve Allen Hearn, thinks that giving audiences the opportunity to interact with well-known authors like Ghomeshi is part of what makes the annual magazine and book festival—which drew over 12,000 visitors last year—so popular.

“The Word on the Street festival is about experiencing literature in a different way—by meeting the personalities behind the words and hearing the stories that influenced their writing,” she says. “I’m really looking forward to what I’m sure will be some lively discussions between Jian Ghomeshi and the people in the audience.”

Allen Hearn also thinks that Ghomeshi’s status as one of Canada’s most highly regarded radio and television hosts will appeal to older teens and 20- and 30-somethings. Plus, she sees a great benefit to new authors who will gain exposure from audience spillover.

“I think it really helps local authors and up-and-comers to be on the stage before and after people like Jian Ghomeshi. It’s a great way for emerging authors to get noticed.”

The programming for the 2013 festival is built around the idea of looking at literature across disciplines.

“It’s going to be a really multisensory experience this year,” Allen Hearn says. “We’re bringing together things like art, music, zine-making and craft. There will be panel discussions, a songwriters’ circle, lots of children’s authors, a special spotlight on non-fiction and a segment that focuses on food and local recipe books. I think there will be something for everyone and for people of all ages.”

One of the events that Allen Hearn hopes she’ll get a chance to take in on the sure-to-be-busy day is something called “Notes From the Fort,” created by Michelle Elrick, a poet from Manitoba who recently moved to Halifax. Elrick has travelled the world creating site-based poetry written in “forts” that are reminiscent of childhood blanket forts. The fort space is constructed from a suitcase full of treasures that remind her of home.

“She’s going to build a fort, write in it, and then share the work that comes from it,” explains Allen Hearn. “I love the idea of the marriage of performance and literature!”

Ghomeshi is also looking forward to having the chance to check out some of the goings-on at the festival.

“I’ve done Word on the Street in different cities a few times, and I think it’s a pretty fantastic event—such a great opportunity to promote books and community.”

Need more Word on the Street?