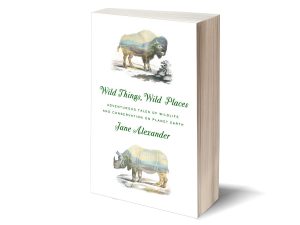 Jane Alexander’s passport must be as jam-packed and well-thumbed as Hugh Hefner’s little black book. She’s travelled far and wide, from places as mundane as Massachusetts and Nova Scotia (where she now lives) to locales as exotic as deep into the Amazon basin of Ecuador and high up into the rain forests of Madagascar. She’s made friends with the last few members of an isolated jungle tribe who have consciously chosen extinction over assimilation and seems to be on a first name basis with every animal activist and conservationist in the world today.

The result of all this globe-trotting is the rather cumbersomely titled Wild Things, Wild Places: Adventurous Tales of Wildlife and Conservation on Planet Earth. (Where else would it take place? One can’t help but wonder.) The book is divided into three sections: Tiger Man, Wildlife Woman and The Body of the Earth, and takes the form of a series of vignettes showcasing the various places Alexander has visited, the various animals she has seen there and the people she’s met. Chapter titles speak to the range of her travels: Bhutan, Myanmar, Galapagos and Papua New Guinea to name a few. Along with the stories of her adventures she talks about the need to preserve the animals we share the world with, some of the ways we’ve failed and some of the successful methods people are using in an attempt to halt habitat destruction and climate change before it’s too late. Her explanations for why certain modern practices, such as fracking and salmon farming, shouldn’t be allowed to continue are by themselves worth the price of the book.

Unfortunately, Alexander falls short when it comes to bringing these experiences fully alive, even though she obviously feels very passionately about her adventures and the world around her. The reader grasps the concept on an intellectual level, but never feels the visceral tug that would make her call to protect the planet and its inhabitant more compelling. And that translates into a less than deeply satisfying reading experience.