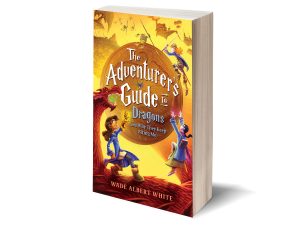 As award nominees, Anne and her friends Penelope and Hiro are looking forward to a fancy dinner and front-row seats at the annual Quest Academy Awards. However, the evening takes a decidely unexpected turn when a strange boy steals her gauntlet, a group of Copper Knights storm the stage and before Anne can figure out what’s going on, she inadvertently triggers a new quest. A Dragon Slayer quest.

This is problematic for multiple reasons: Anne has no desire to kill the dragon queen (the goal of this quest); dragon slaying is highly illegal; and killing the dragon queen will quite likely result in war between the dragons and humans.

This quirky and delightful trio, determined as they are to not kill the dragon queen, seek to warn her and once again find themselves on a seemingly impossible quest. As they attempt to find an ancient and powerful sword, they are nearly arrested for causing an avalanche, helped by a woman who is slowly turning to stone, betrayed more than once by friends, sentenced to death by the dragon queen (but opt to take the dragon trials instead) and ultimately do battle with a giant metal dragon that is intent on destroying the entire Hierarchy. While Anne is in the midst of these and other fantastic escapades, she also finds a few new clues to the mystery of her past.

This sequel barrels along at breakneck pace, offering unique and surprising plot twists at each and every turn. White has created a complex and enchanting world that is delightfully witty.

The tips from The Adventurer’s Guide that preface each chapter are riotously funny and the author skillfully weaves humour and playfulness throughout the narrative, deftly balancing the tension and unrelenting action. The story is filled with clever and imaginative elements, sophisticated social and political structures and endearing and sympathetic characters who are fallible yet full of heart.

There is something for every type of reader in this book, which is an absolute gem from beginning to its unexpectedly moving end, when Jeffery tells a subdued and inrospective Anne, “For what it’s worth, sometimes it’s okay to not get over something. Sometimes you just have to figure out a way to live with it.”

Profound statements of truth from a sparrow.