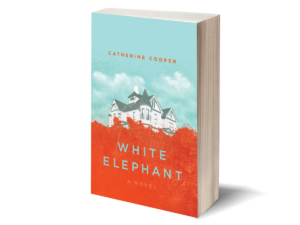 Catherine Cooper’s first novel tells the story of the Berringers, a family that leaves Nova Scotia in professional and social disgrace. The story begins just after Richard, Ann and the teenaged Torquil (Tor) move to Sierra Leone so that Richard, a physician, can take a hospital job after everything goes awry at Richard’s medical practice in Canada.

Sierra Leone is in the midst of a civil war, but that strife and upheaval is simply the backdrop to the three-sided civil war ravaging the Berringer family. Ann and Richard’s relationship is strained and tainted by mistrust, betrayal and more than a little contempt. There’s a serious tax issue lurking back in Canada that only Ann knows about. And generally, Tor just seems to want his parents to be attentive and kind to him — and to take him back to Nova Scotia.

A white elephant is defined by the Oxford English Dictionary as “A possession that is useless or troublesome, especially one that is expensive to maintain or difficult to dispose of.” Legend has it that the King of Siam gifted white elephants to members of his court who had fallen out of favour, which put the courtiers in an impossible position. While an elephant is obviously both difficult to house and ridiculously expensive to feed, the recipient of such a gift could never turn down the honour of a king’s gift — especially not the gift of an animal that many considered sacred. The title of Catherine Cooper’s first novel is an apt one; while there are no actual white elephants in the book, there are plenty of metaphorical ones.

The Berringers all struggle with obligations and burdens, whether they come in the form of a laboured-over house with a black mould problem, a broken relationship or a commitment to providing care and offering advice in a community where western medical practices are suspect and often unwelcome.

White Elephant is a brilliant exploration of human nature and relationships. Not only does Cooper spend a lot of time examining the driving force behind conflict, her portrayal of each Berringer is brutally, unapologetically honest — to the point where it’s hard to empathize with them, because frankly, it’s uncomfortable. Empathizing with these characters feels a little too much like acknowledging that we all have some of the same tendencies they have.

The novel also spends a significant amount of time examining themes of self-reflection, motivations that are selfish or noble (sometimes both at the same time), judgement and acceptance. By jumping between Ann, Richard and Tor’s points of view, Cooper gives the reader insight into the intricacies of their relationships, and the depth of the damage that they’ve inflicted on each other. To a lesser extent, the book is also about fixing relationships, accepting faults and facing past mistakes.

But more than anything, it’s about getting those white elephants out of the house before they destroy everything.