When mystery and high school collide 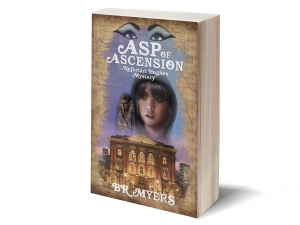 Up until now, Terry Hughes’ rules for surviving high school have served her well. 1. Don’t attract attention; 2. Don’t get involved. 3. Don’t make trouble. She’s adjusted to three different schools in six months by sizing up her fellow students (jock, emo, princess) and learning who to avoid to stay under the radar. But on her first day at Roosevelt High, everything goes wrong and she has to find a new way to survive.

Asp of Ascension, by B.R. Myers, tells the story of Terry’s uneasy transition from a happy, nomadic life with her archeologist parents to the harrowing, petty confines of life in an American high school. A tragic accident has left Terry with a leg brace, a limp and a crippling sorrow. When her exotic first name, Nefertari, is called at attendance, and her history teacher announces that Terry’s father is overseeing a ground-breaking Egyptian exhibit at the local museum, Rule #1 is broken and Terry is in the spotlight. She immediately attracts the attention of the ruling bully-princess, Allison, the basketball hero, Zach, and pink-haired Maude, who is obsessed with candy.

Terry tries to slot her new classmates into predictable categories, but they keep surprising her: Allison with her cruelty, Maude with her friendship, and Zach with his surprising sensitivity and heart-stopping sexiness. Despite her misgivings, Terry soon breaks Rules #2 and #3 as she gets involved with a disturbing mystery that causes oodles of trouble. Along the way she struggles with grief and discovers just how hard it can be to keep people at a distance.

The Asp of Ascension is a satisfying mix of teenage angst and the supernatural. The characters have depth and humour, the dialogue is sharp and believable, and the scenes between Zach and Terry sizzle without getting too graphic. The use of Cleopatra as a role model for teenage girls is both fun and empowering: she’s strong, self-determined and won’t let anyone put her down. This is a good read and the first in what promises to be an entertaining series of future Nefertari Hughes mysteries.