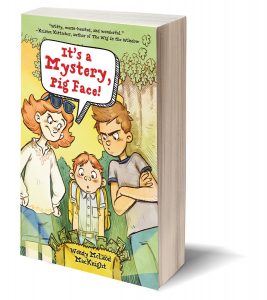 After a somewhat disastrous family vacation in Old Orchard Beach (thanks to Tracy Munroe’s little brother Lester with his numerous allergies), the Munroe family are back home in St. Stephen, New Brunswick. Tracy can’t wait to spend the last two weeks of summer with her best friend Ralph.

When they find a mysterious bag of money hidden in a dugout at the local ball field, Tracy becomes convinced that they should figure out who the money belongs to and become heroes, rather than simply turning it over to the police. So begins their quest to solve the mystery!

Unfortunately, Lester (aka Pig-Face) insists on helping. Their investigations lead to some heated encounters with various friends and neighbours, including Zach, the sophisticated newcomer who’s staying next door, as well as Tracy’s long-time nemesis, Jasmine Singh. Ultimately the mystery of the misplaced money is resolved and the spunky trio learn some valuable life lessons in the process.

MacKnight perfectly captures her small-town setting and the myriad relationships between people who’ve known each other all their lives. Most noteable is her heartwarming depiction of the friendship between Tracy and Ralph, and Tracy’s utter devastation when she realizes that her actions may have jeopardized this friendship. As well, the typical sibling relationship between Tracy and Lester is very realistically depicted, capturing all of Tracy’s annoyance and frustration with her irksome younger brother but also the fierce, unbreakable bond between them when she learns that he is in trouble. The secondary characters are fairly nuanced and realistically depicted, making the story feel even more authentic and relatable.

Touchingly true-to-life, this book offers profound insights on the importance of being yourself, being brave enough to admit your mistakes and determined and resourceful enough to try to make everything right.