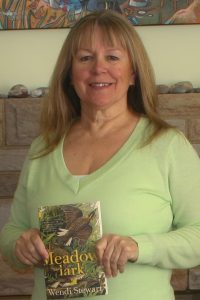 Wendi Stewart has always struggled to call herself a writer. The Wolfville-based author often wears the label with unease, but her impostor syndrome took a serious hit in January when she was awarded a 2017 residency at the Berton House Writers’ Retreat. Stewart will live and work from October through December in Dawson City, Yukon at the childhood home of iconic Canadian author Pierre Berton.

“It’s so validating,” says Stewart. “The writer who’s following me is Lawrence Hill. I feel like if he’s going, then I must be a legitimate writer, too.”

All evidence certainly suggests that Stewart’s literary star is on the rise. Her first novel, Meadowlark, was shortlisted in 2016 for both the Kobo Emerging Writer Prize in literary fiction and the trade fiction Book of the Year award from the Book Publishers Association of Alberta. She has received grants from the Ontario Arts Council and Arts Nova Scotia and industry colleagues readily sing her praises.

Leslie Vermeer sat on the NeWest Press reading committee that voted to acquire Meadowlark in 2014. “I was just transfixed by it,” says Vermeer. “I 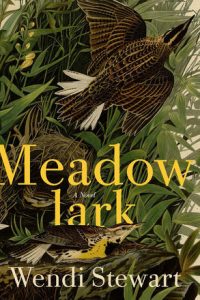 thought it was one of the most powerful manuscripts that I had encountered at NeWest up to that point.” Vermeer also edited the story of a young girl’s journey to overcome her tragic past, but says Stewart’s well-groomed manuscript required few changes. “It was so accomplished. I know Wendi has done other things in her life, but it was a mature work.”

Indeed, Stewart has already lived a full life beyond the page. She was born on a cattle farm near Fort Frances, Ontario and studied at the University of Manitoba. Stewart intended to return home after graduation and work alongside her beloved father, but his sudden death changed her plans. She trained as an accountant, had four daughters and didn’t start writing until her forties. “It just became a healing thing for me,” says Stewart, who studied creative writing at Humber College beginning in 2006 and attended the 2012 Piper’s Frith retreat in Newfoundland’s Piper’s Hole River Valley, where she was mentored by Newfoundland author Lisa Moore.

Aiming to build her literary resume, Stewart began writing short stories that have been published in Cahoots Magazine, Seraphim Editions and The Antigonish Review, among others. A weekly Owen Sound Sun Times column from 2009 to 2013 strengthened her discipline and established the writing practice that created Meadowlark. When Stewart decided the novel was ready for industry eyes, she emailed it to five different literary agencies with a letter of recommendation from Moore. Within an hour, Stephanie Sinclair of Transatlantic Agency had requested an exclusive, one-month review period.

Finding a gem in the slush pile is as rare as it sounds, says Sinclair, who was drawn to Stewart’s precise construction and intimate tone, and signed her to Transatlantic in 2014. “Her writing is very literary,” says Sinclair, “but it’s also very, very accessible … She speaks directly to her readers in a way that I think really provokes empathy and compassion for all of her characters.”

Sinclair recently received Stewart’s second novel – a story of four sisters called Catching Frogs – and says she felt the same electric thrill when she reviewed the final draft. “As soon as I opened the manuscript, I read the first paragraph and thought, ‘oh, she’s done it again.’”

Stewart is now focusing on her third novel, War Paint, which tells the story of a white teacher who is educated by her First Nations students. A residential school near Fort Frances looms large in Stewart’s memory as a community aberration and source of pain for her Indigenous neighbours.

“I don’t want to presume to tell their story,” says Stewart, “but I really want to be part of truth and reconciliation … There has to be a way to honour Indigenous people, and I think we do that by listening to the truth.”

Stewart says she’ll spend the summer talking to residential school survivors and their families – getting permission and learning as much as she can. She will do work-in-progress readings in Whitehorse en route to Dawson City and is staying open to the possibilities the fall residency might offer. While she continues to wrestle with the labels, Stewart has always been serious about the writing itself. “I am really dedicated to this. If you write for yourself and find your own voice, I think you can’t go wrong.”

Cheri Hanson is a writer and journalist based in Vancouver. She's the BC correspondent for Quill & Quire magazine and a freelancer for businesses, creative agencies and major publications.