We’ll All Be Burnt in Our Beds Some Night: The Coarse Crackle of an Unforgettable Anti-hero 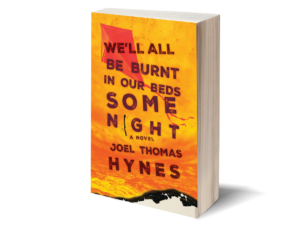 Some fictional characters explode into your imagination and won’t let you be. Johnny Keogh, the anti-hero of Joel Thomas Hynes’ novel We’ll All Be Burnt in our Beds Some Night, is like this—you can still hear his voice after you’ve closed the book, as you’re walking up the stairs, when you wake in the night. He complains and confesses, and jokes, rants and lies non-stop, provoking and shocking. He makes you laugh and moves you to tears—even though to him, any open display of emotion is likely to be met with a “Fuck off.”

Still in his early twenties, Johnny has already been in and out of jail repeatedly for various minor crimes when, as the book begins, he is facing something different: a term in a maximum-security jail for assaulting the love of his life, Madonna. No one believes that although he did pick up a teapot and make to threaten her with it, he didn’t do anything beyond that. She made a run at him and cracked her face on it herself.

When Madonna overdoses and doesn’t appear in court to testify, Johnny finds himself unexpectedly free—and mourning a heartbreaking loss, one that is the latest in a terrible series of events have made him into the volatile and violent person he is.

Johnny sets off from Newfoundland to scatter Madonna’s ashes at a beach she loved in British Columbia. But like everything he gets involved with, the quest doesn’t proceed straightforwardly.

Hitching west, Johnny collides with rich and poor, young and old. For all his supposed toughness, he gets beaten up by a gang of teenage girls; a promising romantic encounter with an older woman in a motel hot tub ends hilariously badly; his longed-for reunion with his estranged father, himself serving time in Kingston, has an equally unexpected ending, albeit with a very different tone.

As he travels, Johnny takes us into his past, sharing stories of excess, abuse and sexual desperation, telling us about the blows he’s given and the one he’s taken from family and strangers alike. Johnny is sometimes wry and sometimes insightful about himself, aware of the brutal things he’s done and sometimes regretful of them. There are similarities to Martin McDonagh’s hypnotic early monologue Rum and Vodka, or James Kelman’s story “The Burn,” stories of men who can’t get their lives right, told with a similarly unforgettable richness of language. Hynes’ writing is coarse and musical and completely absorbing, even addictive. He can’t write a sentence that doesn’t crackle or sing.

Every page convinces, from the grittier details—how to hotwire a minivan with a popsicle stick or make ketchup brew—to the unexpectedly lyrical ones, as when Johnny finds one little wooden bead in his pocket that comes from the necklace of the woman behind the counter of the convenience store he robbed. Or the memory of a trout caught with his cousin (now also lost) and what Johnny, typically, did to it: “Dull pop as he twists and grinds the fleshy moonlit thing beneath his heel, slick, scarlet innards spewing out through the trout’s glossy gills.”

Most of all, Johnny is full of stories—too full, perhaps. Every moment of action seems to summon up a painful or pitiable memory. The proportion of past to present is out of balance and while the structure of tunnelling back creates immense empathy in the reader for the kind of man who simply isn’t written about enough, it also narrows the book.

We’ll All Be Burnt in Our Beds Some Night is essentially a long monologue rather than a novel. By remaining so confined to Johnny, the book limits its perspective. He meets all kinds of people, in Truro or Quebec, but really he’s only able to meet himself.

By the last third of the book, Johnny’s voice starts to feel played out. Perhaps with his beginnings it’s impossible for him to find peace or stability or growth. But Hynes’ intensity and originality leaves you reeling and in despair for the smugness of a society Johnny experiences only as a careless cold shoulder, the closed hand of authority, or a kick in the teeth.

Damian Tarnopolsky teaches creative writing at the University of Toronto School of Continuing Studies and is the Managing Editor of the Toronto Review of Books. His most recent book is the novel Goya's Dog.