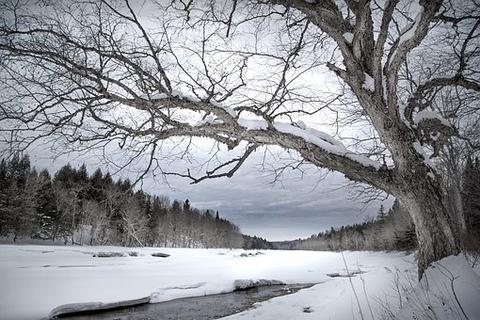 Wayne Curtis’ Christmas in the Time of COVID

Renowned New Brunswick author Wayne Curtis generously sent us these reflections on the holiday season during a pandemic:

IT IS NOT AN EASY THING TO SELF ISOLATE in a second-floor bachelor apartment during the yuletide season. Nor is it easy to stand, mask to mask, with a young widow and not be able to embrace her when you attend the funeral of a loved one who has fallen to the virus. Or to stand outside in the cold and wait for the merchant to allow you into the food store where you have been shopping for thirty years. Or to miss out on the seasonal church supper, the community breakfast, bingo at the legion or a symphony at the playhouse that has gone viral when you are without the tech savvy to find it on the computer screen. Plus back in June, I had to keep away from my grandson’s high school graduation.

To grasp some sense of normality through all of this, I time travel. I go back to the days when my sons were young, my wife Sharon was alive and well and we lived in our farmhouse in the north of the province. The images of those sweet old Christmases of my youth are now recycled inside me like the big-screen reviews from down at the Cineplex.

In that old day, in early December, when the fields were still bare, though frozen, I had set out to decorate for the yuletide. This was an annual tradition that excited me, although Sharon sometimes scolded me for “rushing the season” and overdoing it with the not-so-subtle fir boughs, red ribbons, rosehip berries and a tree the boys and I brought home from our woodlot. We dragged it across the dreary fields to our front door and into the big wallpapered parlor while chanting little Christmas ditties and recitations soon to be heard at the school concert. This was before the electronic revolution, and the Charles Dickens Christmas was still very much alive at our home. It was not that long ago in the greater scheme of things.

The decorating of our big house took place a couple of weeks before the concert, a period when the boys rehearsed recitations and songs in the evenings to the applause of Sharon and me. At the concert, having gotten an hour off from the general store where I worked, I sat at the back of our little one-room school and listened to the same Christmas songs that I had sung there as a boy, and with the same teacher. It brought tears to my eyes.

It was a time when I sat at my old secretary desk and wrote salutations on cards to be mailed to extended family and relations in Blackville, Keenan and Gray Rapids, New Brunswick. Having been hand-written, there was so much of a person’s soul in the old-fashioned Christmas card. So much of a person’s personality could be determined by the quality of the writing. I still send paper cards to a chosen few in my age group.

In that north-country setting, the wind was cold from the east as it howled across those big fields in back of the house and threatened the first snowfall. There was an organ-like moaning in the brass power lines that stretched along the highway, sagging from pole to pole, like so many sizzling cat’s cradles. The timid winter sun, with a halo around it, projected rays, without warmth, through branches of the centuries-old elm that surrounded our picket-fenced garden. And the distant barns, though empty and sunken, held onto their place at the far side of the frozen dooryard. From the back shed, I carried maple logs into the front room to be lit in the big brick fireplace.

One morning, I took a shopping bag of rosehip up the highway to the little church where I was a warden and where Sharon played the organ. I arranged these red berries at the base of the colored windows and on into the sanctuary, where framed in leaded stained-glass, Jesus stood with a lamb in his arms. On Christmas Eve, I went there early evening to give the bell the first ringing. (I can still hear its echo along that big frozen river.) I greeted the parishioners as they filed in and took seats in the nave of the little church; the purple-faced congregation looking larger because of the chapel’s smallness. Out back, toward a dense tree line there were rows of white tombstones, one of which has since become Sharon’s.

After the service when we came out of the church and bid our neighbors “Merry Christmas” it was snowing softly and there was a great hustle to get to our cars. Back at the house, I built up the fire and the boys hung their stockings while Sharon, having kicked off her high snow boots, played the piano. She performed Fields Concerto # 1 in E-Flat Major as well as Beethoven’s Sonata # 2 in C Sharp Minor. She attempted these difficult pieces because she knew they were my favorites and that I liked this kind of music on a stormy winter’s night.

At that time in my life, I was not satisfied with mediocrity, rather I yearned for the day when I could escape the country; buy a home on some shaded city street, attend a grand Cathedral. But years later when I sat in a city basilica among better-dressed people and listened to a Bach choir and a big pipe organ, I wished that I were back in that little three-windowed, clapboard church by the Miramichi River. In that old day, I had looked to the future to compensate for the disappointments of the present. But the indifference I feigned for now makes me long for its return.

I ask myself where the magic has gone so that even good verse and music carry new mythologies – just fragmented pieces of the old – and how remote our old religious superstitions have become. Even old friends from my former abounding life, so varied, festive and novel, have faded away with the years. Only ghosts remained to fill the void when these people were gone and the double twilight of a time and place; those intimate days in the country, took each of us our separate ways, one by one.

These are a few memories from when my young family and I lived in our old farmhouse in Miramichi, a place that no longer exists, but where, the snow still drifts across those big fields and clings to the centuries-old garden bushes. The farmhouse and fields as I knew them, now stand like pastel sketches in my mind. It is odd how something so organic and wonderful, something so pure and innocent, could have been sacrificed in our quest for prominence. Now, in this time of changing climates and a world pandemic, these entities have become an escape, a place in the mind in which to retreat from the new world order of things.

During my evening walk on Fredericton’s George Street, a light snow is falling and the giant oak trees by the sidewalk lift themselves to stand on a white earth. The colorless landscape, with the oblivion of a historic graveyard, is in need of more window lights, and yes, music to ward off the melancholy, bring some spirit to this place of indifference. At a garlanded window, I stand and listen to an electric keyboard, around which young voices raise in a chorus of Rock and Rap. A contemporary of mine, obscure and ghost-like and with snow clinging to his hoodie, happens along. For a moment he stands beside me to listen.

–Wayne Curtis has written 19 books and a screenplay for the CBC. He now divides his time between his apartment in Fredericton and his log cabin on the Miramichi. His latest book is entitled, Winter Road.