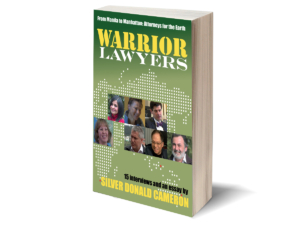 Some years ago, the amount of carbon dioxide in the earth’s atmosphere reached the alarming level of 390 parts per million. Last year we were told that the level had now reached 400 ppm. And in less than twenty years from now carbon dioxide levels are projected to reach 450 ppm. Climate scientists have been warning us of the grave dangers for the planet and its inhabitants if we don’t deal with this issue and succeed in reversing this trend.

In 2009, one of the most respected climatologists in the world, Dr. Jim Hansen, published a book with the alarming title, Storms of My Grandchildren: The Truth About the Coming Climate Catastrophe and Our Last Chance to Save Humanity. In the years since, many other reports have been issued by reputable scientists from around the world with equally dire warnings. Most of us have paid little attention and continue on our merry way, like lemmings headed for the cliff, oblivious of the precipice ahead.

It is in this rather negative and hopeless frame of mind that I was recently sent a copy of Silver Donald Cameron’s latest book, Warrior Lawyers: Attorneys for the Earth. At first I wasn’t keen on delving into it, yet another book on a subject – climate and the environment – that no one seems to be able to do anything about. But after reading the first few pages, I was hooked and couldn’t put it down until I had finished it.

Cameron is a born storyteller and a people person, an enviable combination for any writer. In this, his latest opus, these skills again serve him very well. The book is a series of interviews he conducted with lawyers from literally around the world, who have dedicated a good part of their professional work to protecting and preserving our ecosystems through enshrining and enforcing environmental rights in the constitutions and the laws of their countries, and in international law.

In the book, we meet a fascinating and inspiring group of seventeen men and women, pioneers doing groundbreaking work, often pro bono, in the field of law and the environment. I call them pioneers because, if we, as the residents of the planet, survive the present onslaught of global warming and climate change, that’s exactly how these people will be known by future generations.

I’m embarrassed to admit that before reading the book, I had not heard of any of them. Having just finished the book, I now feel that I know them as friends, and my admiration for them and for their work is boundless. David Boyd and John Borrows (Canada); Cormac Cullinan (South Africa); Pablo Fajardo (Ecuador), Antonio Oposa, Jr. (Philippines); Marjan Minnesma and Roger Cox (the Netherlands); Polly Higgins (the United Kingdom); Steven Donziger (the United States) – these are some of the amazing people I’ve met in the pages of this book. They are fighting and winning groundbreaking and precedent-setting cases having environmental rights enshrined in national and international law. These, as well as the rest of the seventeen people profiled, should be household names around the world and, hopefully, if this book is widely read, as it deserves to be, they will become well known and they will motivate thousands of people to get involved in environmental issues, wherever they are.

Three of the precedent-setting cases described in this book need to be mentioned and need to be made known internationally: the Mendoza case in Argentina; the Chevron-Texaco case in Ecuador; and the Urgenda Case in the Netherlands. In each of these cases we have judicial decisions that were not thought possible at the time and that will empower the environmental movement in the immediate and long-term future. These cases should be made compulsory study in every law school, in every country, in the world. The Chevron-Texaco case, in particular, is an international one that has been going on for years, and has a Canadian component which is presently playing itself out in our judicial system. The chapter describing the history of this case is worth the price of the book itself.

We all owe Silver Donald Cameron a huge debt of gratitude for all the work and effort he has put into this project and in other environmental efforts over the years. An almost octogenarian, he could well sit back and enjoy his remaining years and let the rest of us worry about the fate of the planet. Instead he soldiers on. He and his work are an inspiration for us all. According to a leading climatologist, Dr. Mark Jacobson, of Stanford University, “There are no technological or economic barriers to converting the entire world to clean, renewable energy sources. It is a question of whether we have the societal and political will.” All of us need do our part, all of us need to get involved, and make our voices heard.

[Editors note: This book is not available in stores, but can be purchased in paper or as an e-book format from Amazon or from the author at the link below:]

Gordon Pellerin is a retired high school English teacher from Larry's River, NS, who is very concerned about the world his generation will leave to their grandchildren.