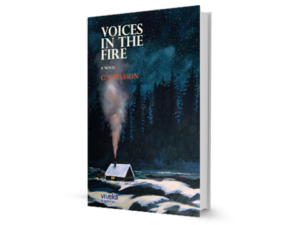 Liberty, Cato, Phoebe, Dismal, Cora Lee. Their names stayed with me long after I finished reading Voices in the Fire. I imagined their faces, curious, smiling, apprehensive, terrified; it was painful to fully imagine their lives, to allow their voices to speak to me.

The people – landowners, Loyalists, Freed Blacks, slaves – slip out of the pages and into your mind as they are tossed about by revolution, war and the whim of countries’ negotiations. Forced to leave their homes in the American South, they flee to St. Augustine, Florida, finding some measure of settlement.

Just two years later, when that state was returned to Spain by the British, they were transported to a wintry Nova Scotia. There, joined by immigrant Scottish crofters evicted from their rough sod huts, they faced hardships of barren soil, newly-built homes razed by fire, loss of their few possessions, loss of love,  often of hope.

I read the book in January, as world order shook and again for this review as we moved into Black History Month. The parallels were to me, inescapable.

C.J. Masson’s novel is based on true historical events of the late eighteenth century. It begins when in 1990 a skeleton is discovered, buried in what was intended to be the garden of her cottage on Eight Island Lake in Guysborough County.

Whose skeleton, and how it ended up there, with a copper British  ha’penny, minted in Virginia but never issued, on a cord round its neck, is in great part the essence of the book. Told vividly, with with a true eye for the period and respect and admiration for the courage and resilience of the characters, the book is as much about this county’s ancestors as it is about human relations, tolerance, acceptance and endurance.

Interwoven with the historical narrative are short chapters describing Masson’s original discovery, her subsequent ongoing detection efforts to find out more and some insights into her own life. These latter provide a telling contrast of education and twentieth century comforts with the poverty and deprivations of her characters.

Read Voices in the Fire for a good historical mystery, to better understand a lesser-known period in Canada’s multi-cultural, multi-ethnic history, to realise we still have a longer journey to travel than the Loyalists had to make.

Voices in the Fire
by C.J. Masson
Viveka Publishing