Sylvia D. Hamilton is a Gemini-winning Nova Scotian filmmaker and writer with an abiding interest in understanding history, especially Black history, and bringing that understanding to her audience. Her films include: Black Mother Black Daughter; Speak It! From the Heart of Black Nova Scotia; Portia White: Think On Me; and The Little Black School House. Hamilton is an assistant professor at the University of King’s College in Halifax.

And I Alone Escaped To Tell You (Gaspereau Press) is her first poetry collection. It explores the long history of how African people came to Nova Scotia. Hamilton spoke with Atlantic Books Today about her bold new work.

How did your documentaries prepare you to write this collection?

Many of the poems in the collection have evolved over time. I am usually writing while I am working on documentaries. My documentary research process is extensive, involving a lot of primary work in archives and oral interviews and location research.  I listen, and I read a lot. It’s been more of a simultaneous process rather than one in preparation for the other.

Why did you decide poetry was the way to tell this story?

Stories and parts of stories are told in many different ways. Poetry seemed to be the best medium for some of the stories and themes (history, memory — both individual and collective — family, time) I wanted to explore. It also allows great space for the imagination and for thinking about and using language.

How would you compare writing poetry to documentaries?

Some of the pieces in the book are prose poems. Depending on the style of the particular documentary, many use poetic images, metaphors and symbols in the story telling.  They are different forms of creative expression so it’s not easy to draw a direct comparison; poems create images in the reader’s mind’s eye while documentaries treat viewers to a flow of direct images.

How did you research the poems of “Section One”? Are they based on real people?

I’ve been engaged with historical research on African-descended people in Canada for many years. I draw on primary material found at the Nova Scotia Public Archives (among other sources), on oral histories I’ve done, and location/place research. Some of the characters in “Section One” are directly based upon real people, but often only fragments of information about them. It’s a process of immersion.

How long did you work on this collection?

The collection has been in the making for many years. I’ve had work in a couple of volumes of the Dalhousie Review, so a few pieces were previously published there. 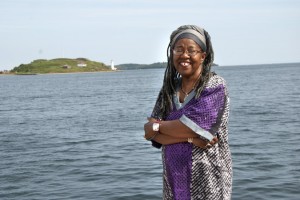 The poems of “Section Two” seem more autobiographical. Are they? How do they fit into the bigger collection?

There’s an interrelationship among the speakers in the book. In the first section, the voices — the speakers — come to us across centuries, beginning with the Middle Passage when African people were kidnapped from the African continent and brought to the Americas. My ancestors who came to Nova Scotia were free people — they were Black Refugees from the War of 1812. So while some of the poems in “Section Two” are autobiographical in a direct sense, but more so, it is a matter of the poetic imaginative impulse that frames the entire collection — an effort to draw from history, experiences and the imagination to create a world, a particular place.

Why do you think it’s important to think about the lives depicted in And I Alone Escape To Tell You?

Perhaps the work offers a small window to look through, a way to reflect on our collective past and to think about what it means for us today — all of us, not only people of African descent. We share this place and are sentient beings. What does it mean that we enslaved African people in this country, in this province? This is indeed an undeniable — though often denied — factual part of our history and our legacy that we need to face, eyes wide open.

What do you hope your body of work will accomplish?

I guess you are including all of my work in this question?  I rarely think in such broad terms, but it’s not an unreasonable question.

I hope that people will find something in my work that makes them think, that informs them, perhaps even delights them in some way. All I can do is make the work in the best way I know how, with creativity, honesty and integrity. After that it is up to “the work” to do its own “work” in a way: To live out there in the world, to engage people in whatever way it can.

Read a review of And I Alone Escaped to Tell You on page 36. Connect with Sylvia Hamilton on Twitter @maroonfilms.

Jon Tattrie is an award-winning journalist and author. He’s written four books, most recently Day Trips From Halifax and Cornwallis: The Violent Birth of Halifax. Connect with him on Twitter via @jontattrie.