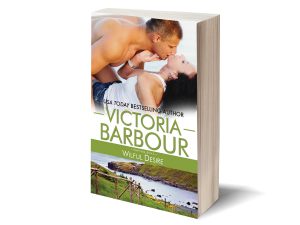 Will Walsh, faced with the choice of staying in Heart’s Ease Newfoundland, and marrying his childhood sweetheart, or a role with the elite Maritime Tactical Operations Group (MTOG), chose his career and the MTOG is a demanding partner. Wilful Desire begins in the middle of one of Will’s missions. Author Victoria Barbour captures all the intensity of it, pulling readers right into the dank hold of a fishing boat in the Caribbean before shuttling them back to the colder, brisk shores of Eastern Newfoundland.

Mae Mercer stayed in Newfoundland because she’d been forced to make a choice between Will’s future and her ailing father’s present. From that limited array of options, Mae manages to carve out a career that, years later, gives her more choices that many women could dare dream. Still in Heart’s Ease, she is a digital entrepreneur, running a Huff-Po-like website and trying to decide where life should take her next. That decision becomes all the more difficult when Will returns home after a five-year absence to rest, after a particularly trying mission, and they both discover the spark between them—primarily physical as the story begins—is still there.

The tangled web of physical desire and emotional need are deftly woven to move the story forward. Despite Will’s earnest attempts to do the right thing and win Mae over, he struggles to learn that it is not his place to make the right choices for her. The moment when Mae truly understands that she is happiest when she’s fully in command of her life brings Will’s well-intentioned plans for their future to a screeching halt.

For of non-readers of romance still trapped in the myth that the genre is not feminist literature, this might come as a surprise. This black moment will have readers turning pages to learn if these two can, in fact, have a future together on terms they can both live with. It is this juggling of priorities—the modern needs and expectations of women bashing up against the traditional roles of both sexes—that creates the bulk of the tension in Barbour’s tightly written contemporary romance.

Heart’s Ease, Barbour’s fictional Newfoundland coastal town, is in some ways the main character in the book. The interweaving of locals such as the indomitable Great Aunt Ida and newcomers make up the backbone of the Heart’s Ease series, of which this is the fifth book. The author’s love of her native Newfoundland is obvious and infectious and quickly draws the reader in.

It was not just the Newfoundland and Labradorian aspects of the book I enjoyed—I thoroughly enjoyed the Canadian references sprinkled throughout the story, be they French-Canadian swear words coming from Will Walsh’s superior or the details of Will’s crisp white RCN uniform. These are not plentiful in contemporary romances (and even more rare in historical ones) and as a reader of romance, I don’t think I appreciated how much I missed them until they were presented to me.

Wilful Desire, for the romance reader, has all the elements you’d expect from a contemporary romance—a wonderful setting, a fantastic supporting cast and a dynamic hero and heroine. Barbour’s writing is strong, bringing the reader right into the story. The naval aspects of this book were well captured. As a Navy brat myself, the language felt real and familiar. Romance novels—like murder mysteries and even some literary fiction—has an element of hyperrealism to it, but that is balanced with a familiarity, as an Atlantic Canadian, that I found welcome.

Wilful Desire is a satisfying read. If you’re looking for something a little different, a little less wrapped up in the gauze of Americana, this is as refreshing as an evening walk on your favourite local beach. Recommended.

Michelle Helliwell is the author of Not Your Average Beauty, No Prince Charming and Never Trust a Rogue in Wolf's Clothing. She lives in Nova Scotia.