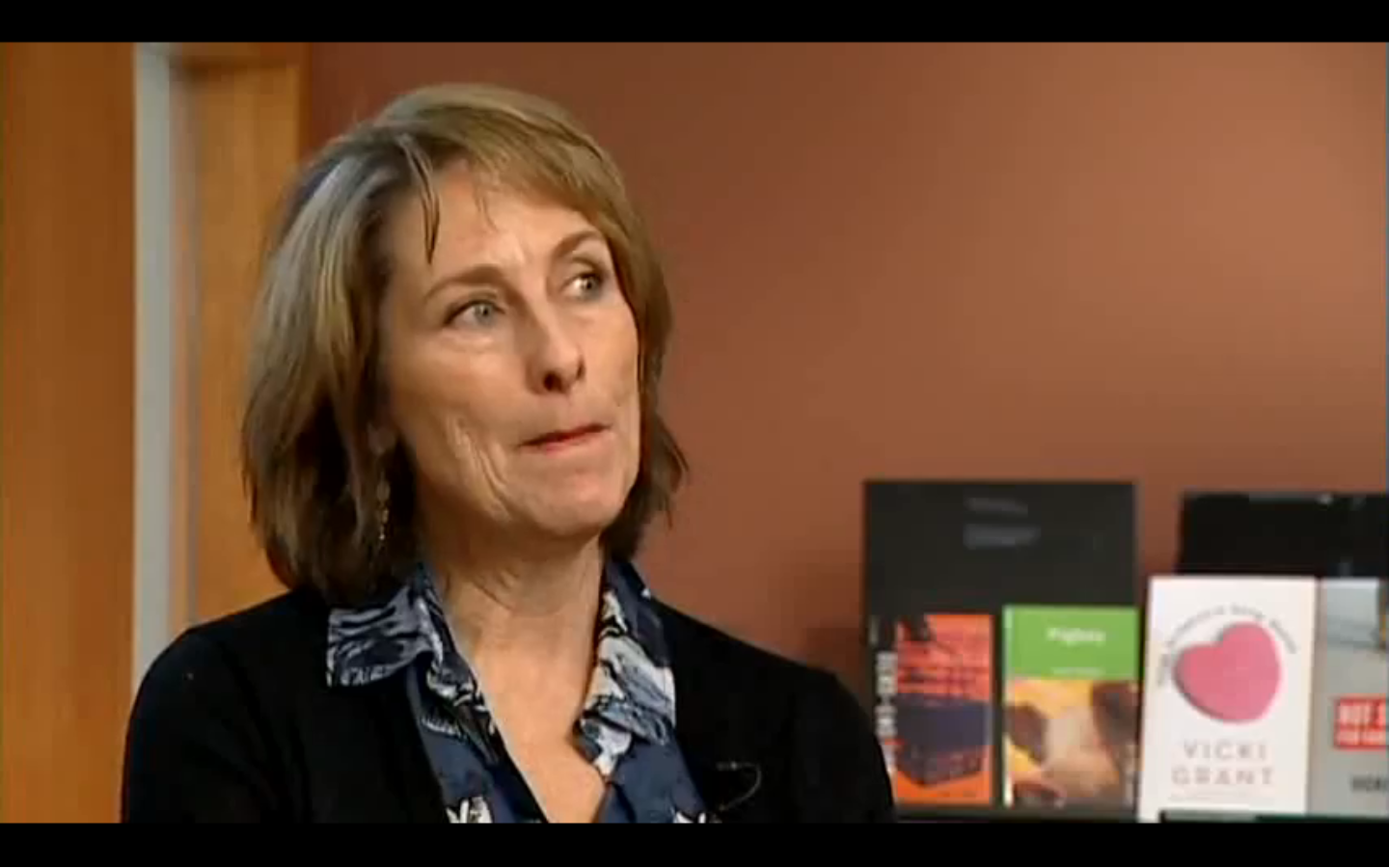 Vicki Grant is a prolific and highly successful YA author and screenwriter. Grant not only has won several prestigious writing awards, she also has been nominated for more than 25 major awards such as The Edgar Allan Poe Award, The CILA Children’s Books of the Year and The Silver Birch.

Her 17th book, 36 Questions That Changed My Mind About You, has been sold to twenty countries and terri

tories and will be launched this month. Acquiring editor for Hot Key Books in the UK (and editor of six of the Harry Potter books) Emma Mathewson said of Grant’s latest novel, “It’s been a long time since I have read something that is so sharp, funny, and so brave.”

In a quest to get behind the scenes in this writer’s life, Sandra Phinney conducted this interview for Atlantic Books Today:

Atlantic Books Today: Would love to hear about the first time you put finger to pen/paper (or keyboard), and what propelled you into the writing life.

Vicki Grant: I went to NSCAD to become a graphic designer or, at least, because I couldn’t figure out what else I’d like to be. I learned a lot there, the most important of which was that I didn’t have what it takes to be a designer. I realized I was more interested in coming up with the headline for the poster than figuring out what it should look like. So I went back to Dal for a BA and Laval for a certificat d’enseignement. My father was thrilled when it looked like I’d finally found my way and was going to become a teacher. Instead, I took a right turn and walked into an advertising agency where I offered my services for free if they’d let me try my hand at copywriting. That eventually took me to Toronto and work at a number of agencies there. Copywriting led to TV scriptwriting and scriptwriting led me to writing a middle-grade novel set in the children’s television industry. The Puppet Wrangler came out in 2004 and I’ve been at it ever since.

ABT: At some point, your audience jumped from local/regional, to national, to international.  To what do you credit those leaps in readership and sales?

Grant: Actually, that’s not how my career developed. My first novel, The Puppet Wrangler, was published in Canada and the US by Orca Books out of British Columbia. Orca might not be a name that many people outside the industry recognize but it’s a good-sized player in the Middle-Grade and Young Adult market, both in North America and in school markets around the world. In fact, one of my favourite covers is for the Korean edition of my second novel, Quid Pro Quo. I’ve also published three books with HarperCollins Canada. (Funny story: my second editor at HarperCollins is a King’s College alum named Hadley Dyer. As an 18-year old Annapolis Valley girl, new to Halifax, she worked as my children’s nanny. We loved her then and we love her now. She was very good at both jobs. )

I guess the biggest leap in sales and readership came with my latest novel, 36 Questions That Changed My Mind About You. It was first acquired by an American publisher, Running Press, (an imprint of Hachette’s) then sold to the UK, Germany, France, Spain, The Netherlands and 12 other territories around the world. That ‘leap’ happened in a large part thanks to my new agent. Fiona Kenshole is a Brit, living in the US, working for a Canadian company. She was a former YA editor herself with deep ties in the American and European markets. She made sure the right people knew about the book. She’s a wonder.

ABT: You’ve got some great momentum going. What are your plans to build on that momentum? 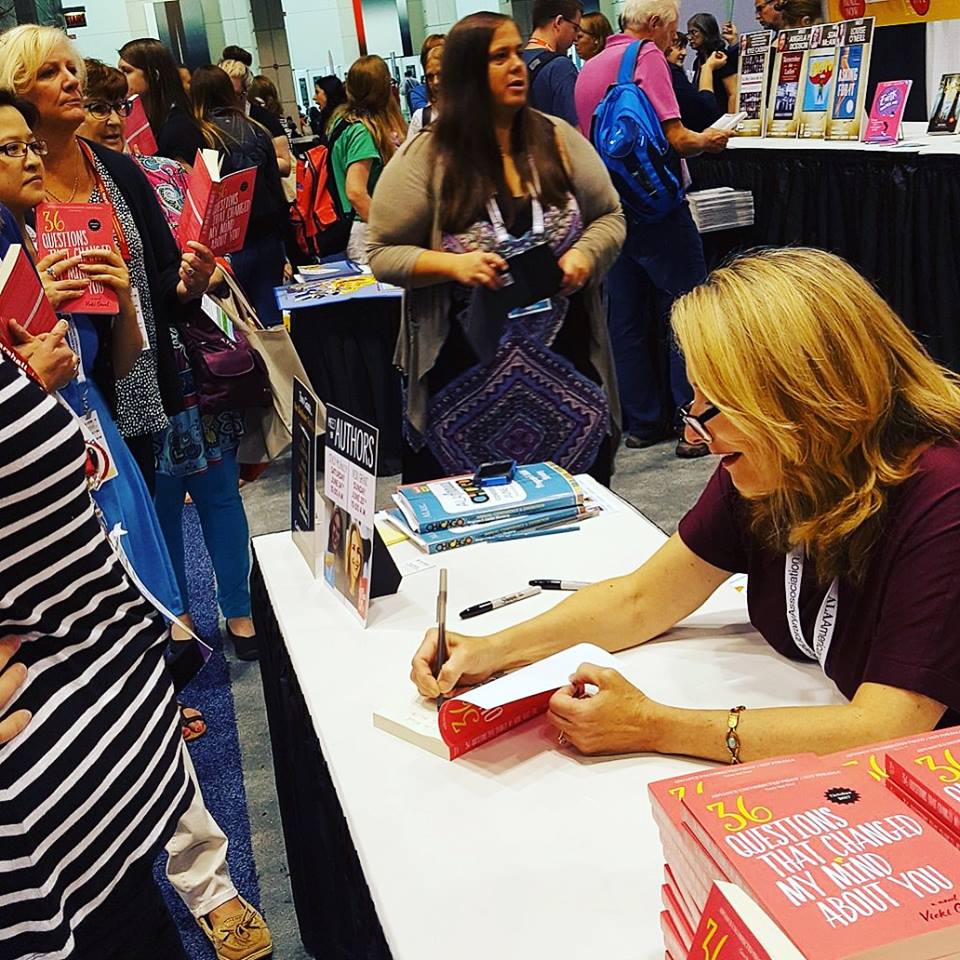 Grant: I’ve got a number of book events in the fall and early winter, mostly in Toronto. I’ll also be heading to the American Library Association conference in Denver in February. These conferences are a great way to meet the real people responsible for keeping the momentum going: the readers, teachers and booksellers. It’s also a chance to meet other YA authors. The gossip is fabulous!

Other than a little so-called touring, the only thing else I can do is get the writing done. My agent is anxious for me to finish something in order to show it to the various editors who bought 36Q. That’s a bit nerve-wracking but my years churning out advertising and TV scripts have given me some coping skills. I’m used to writing to deadlines. I’ll be 15 pounds heavier and my teeth will be ground down to little nubs, but I’ll get the book done.

ABT: If you were giving tips to new writers who aspired to be in your shoes right now, what would you advise them?

Grant: Like Nike says, “Just do it.” Sit down and start writing. Most of what you produce will be pretty execrable but that doesn’t mean it’s bad. It’s just part of the process. Manure makes the garden grow.x`

ABT: Are plans in the works for your next novel and, if so, care to give us a hint?

Grant: More than plans. I’ve got four in various stages of development. (That’s a lot for me.) I just sent the final draft of In The Buff to Orca. It’s a short funny adventure novel about a boy whose crotchety grandfather joins a nudist colony. It’s designed for ‘reluctant readers,, kids who, for whatever reason—dyslexia, a second language, or a lack of interest—don’t like reading. (I write a lot of these ‘high/low’ novels. I love the challenge of appealing to kids with better things to do than read.) I’ve also got a picture book at a publisher’s, a first draft of a full-length YA mystery at my agent’s, and 752 ill-chosen words of my next novel open on my laptop.

ABT: Tell me a bit about your writing life e.g. where you write, when you write, how you organize your time, i.e. a “typical” day if there is such a thing. Or an a-typical day.

Grant: I always start the day early with a cappuccino and the crossword. After that, anything goes.

So, for example, take today. I should have worked at my treadmill desk but I was lazy so instead at 8:30 I went into the dining room and jotted down plot points for the new book I’m working on. (To be honest, I almost always work at the dining room table. I just like saying I have a treadmill desk.) Most of the plot points came from an informal story meeting I’d forced on my husband during the ride back from the cottage this weekend. I do that quite a bit. While he’s stuck driving, I make him listen to me outline a new plot in tortuous detail. I doubt he enjoys the process very much, as not only is the story pretty rough in the early stages but I also get really irritated when he points out its many holes. Still, I find talking the book through helps me see where I’m going and occasionally— occasionally!—he’s right about something.

At 10:00, I had an interview and my photo taken for a newspaper article. This is not usually part of my day but my book is launching next week so there’s been some interest. The ordeal was also not as painful as it ordinarily is as I had my hair done yesterday so was at least not worried about that.

At 11:00, I answered emails from teachers regarding school visits. I struggle with anything administrative so while I enjoy the visits themselves—not to mention the income—I loathe the scheduling. I’m much less anxious talking to an auditorium full of kids than I am getting myself organized enough to find my way there. (At heart, I’m still that 10-year old kid who never made it to class with her gym clothes on PE days.)

Sometime around 11:30, I called my brother. This new novel takes place in a medical setting and he’s a doctor so I hit him up when I need answers to questions I don’t want showing up on my search history.

Just after noon, I biked downtown to meet a lawyer for lunch. This was again research for the book. I don’t do a lot of research – facts aren’t my strong point – but I do enjoy learning about arcane, and hopefully, unseemly subjects. I gave her a rough idea of where I wanted to go with the book and she supplied me with some juicy leads to follow.

I got home around 2:00 and carved up the Thanksgiving turkey for soup. I answered some more emails then spent a little time thinking what I could do with the information the lawyer had given me. This is my favourite part of the writing process—the early messing around with ideas. A very close second is the rewriting. I love editing. My very least favourite part is the actual writing. First drafts are hell. They bring out that 10-year old kid in me again, this time with homework I don’t want to do. Tomorrow, I’m going to sit down at the table (or better stand up at my treadmill desk) and I’m not going to let myself leave until I get 1,000 words written. (Ha. Good luck with that.)

At 3:30, I started answering these questions. When I’m finished, I’ll email it off, pour myself a glass of wine and put the final touches on the turkey soup. After dinner and a little Netflix, I’ll read until I fall asleep. The fascinating life of a Canadian YA author.