Cape Breton and Nova Scotia have close ties with the Highlands and Islands of Scotland, in no small part due to thousands of Gaelic-speaking migrant Scots. 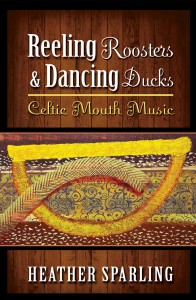 Bolstering its list of Celtic- and Gaelic-centred titles, CBU Press’s new offerings have direct connection with those Highland roots.

Reeling Roosters & Dancing Ducks: Celtic Mouth Music by Celtic scholar Dr. Heather Sparling, brings together years of research, observations on both sides of the Atlantic and analyses of melodies and lyrics.

MacKinnon is the current holder of the Scottish Bardic Crown, official bard (poet laureate) of the Royal National Mod. He is the first poet to the appointment from outside of Scotland and his three-year term will culminate at the forthcoming Mod in Inverness. He has appeared in numerous literary events and festivals in Scotland and Ireland, most recently the Queen’s Baton Relay (Commonwealth Games) in Stornoway sponsored by Scottish PEN.

Rudan Mì-bheanailteach is an Cothroman is MacKinnon’s second full-length collection of original poetry. His first, Famhair / Giant and Other Gaelic Poems was published by CBU Press in 2008, and launched during the Mod in Falkirk.

In Reeling Roosters & Dancing Ducks, Heather Sparling brings together years of research into puirt-a-beul – the Scottish Gaelic term for mouth music – including an array of historical references, interviews with Gaelic singers in both Scotland and Nova Scotia, observations of puirt-a-beul performances on both sides of the Atlantic as well as on recordings, and analyses of melodies and lyrics.

Sparling’s Nova Scotia viewpoint allows her to consider puirt-a-beul in both its Scottish and diaspora contexts, a perspective that is often absent in studies of Gaelic song.

CBU Press will launch the books during the annual Mod, being held this year in Inverness, where they will be part of the Gaelic Showcase (Eden Court), October 10-18. Inverness-shire is celebrating 2014 as the year of Highland Homecoming.

MacKinnon and Sparling will make a presentation at the Inverness Library on Wednesday, October 15, at 2 p.m. Following the Mod, they will be making presentations in Aberdeen (20), Edinburgh (21), Glasgow (22) and Skye (23).

Reeling Roosters & Dancing Ducks: Celtic Mouth Music and Rudan Mì-bheanailteach is an Cothroman / Intangible Possibilities will be available for sale during these events and available to the public shortly thereafter. They will be available in Canada and the U.S. at the end of October.