Turbulent politics on The Rock 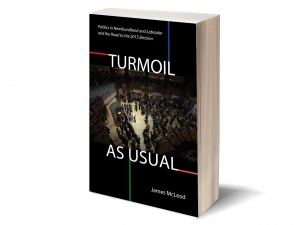 Politics on “The Rock” is not only an island blood sport but also tends to be turbulent and unpredictable. Political culture has been dominated by larger-than-life premiers with plenty of bombast, most notably Joey Smallwood, Brian Peckford, Clyde Wells and Danny Williams. That’s why Turmoil, As Usual, a phrase plucked from Newfoundlander John Crosbie, is such an apt title for James McLeod’s first book on the stranger-than-fiction 2013 to 2015 period in Newfoundland/Labrador politics.

Freed from the daily grind of producing factual news reports, Telegram political reporter McLeod lifts the veil and, in places, cuts loose with scalpel-like precision. Stirred by attending his first NL political convention, in September 2013, he makes good on his promise to tell “all the stuff nobody ever hears about.”

McLeod has filled this book with fascinating little vignettes sure to titillate political junkies and entertain readers, from rebuffing Premier Kathy Dunderdale’s vigorous efforts to get him on the dance floor, to witnessing the NDP tribal warfare that claimed Lorraine Michael to trying to make sense of short-term Premier Frank Coleman’s incoherent mumblings.

Premier Williams cast a bigger shadow than McLeod’s insider account seems to recognize. After the departure of Williams, his successor Dunderdale was unable to hold the fort and no one was able to fill the political void.

Current Liberal Premier, Dwight Ball, “a bland guy with a big chin,” may have finally toppled Paul Davis and the PCs but he does not escape unscathed. Observing him up close, McLeod is underwhelmed by the slow-moving, impeccably dressed Deer Lake pharmacist who now holds power, and hints that the turmoil may not be over.

Turmoil, As Usual: Politics in Newfoundland and Labrador and The Road to the 2015 Election
by James McLeod
$19.95, paperback, 247 pp.
Creative Publishing, January 2016