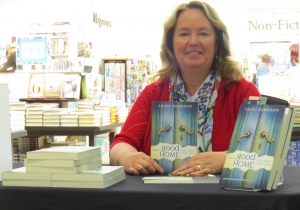 After two days signing books in Halifax, St. John’s Newfoundland author Trudi Johnson is headed to Moncton, Fredericton, Charlottetown and Summerside. She is touring her debut novel, From a Good Home.

The book centres around a young woman sent from the small community of Bonavista Bay to be a domestic servant in St. John’s in the 1930s, and the subsequent generations of the aristocratic family she works for.

“My mother was a domestic servant for five or six years in St. John’s,” Johnson says. “I grew up hearing the stories, the good and bad.” Stories of young women, girls really, who left so much behind and took a huge risk to support their families or strike out on their own.

“A third of women in Newfoundland who worked out of the home in the thirties were domestic workers,” Johnson says. “And St. John’s is very much a city of social class. I could write an academic work about that but no one would read it. I was after the emotional part of the story.”

And if reader response is anything to go by, she has indeed struck an emotional note. She receives several emails a day from readers who took the time to find her website and let her know they love the story. And it’s been “flying off the shelves at the St. John’s Costco.”

But for connecting with readers, nothing beats the good old-fashioned book tour. “I see this is a beginning,” Johnson says. A way for her to connect with a new audience; and the multiple television appearances that have accompanied her tour haven’t hurt either.

But she perhaps most relishes meeting people who have already read the book. “One woman came right up to me and said, ‘So what do they say to each other?'” The woman was referring to the ending of From a Good Home; she wanted to know what happens next.

Johnson was able to offer a coy response, as there is a sequel in the works. “More family secrets to come.”

You can meet Johnson in person at the following locations and times: