Treasury of Newfoundland Stories Volume I 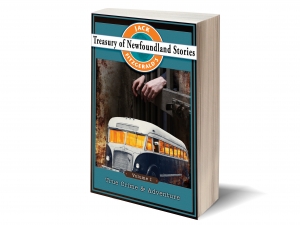 In 1968, the delay of the Royal St. John’s Regatta from Wednesday, August 7th, to Thursday, August 8th certainly did not dampen the spirits of the city’s population, who turned out in droves to witness the event. Stores were closed ─ the town seemed to be emptying in an exodus towards the east end of St. John’s. Men, women and children, travelling in cars, busses, cabs, bicycles, and even using shanks-mare (feet) were cheerfully heading east.

It was as though a “carnival atmosphere” had suddenly swept the town ─ and why not? It was the 150th Anniversary of the St. John’s Regatta ─ a day of celebration like United States’ Fourth of July, France’s Bastille Day or a traditional Newfoundland Christmas Day.

Among the tens of thousands of fans at Quidi Vidi Lake that day were Gerard Parsons and Audrey Ballett ─ not at all unknown to each other. Although they never chanced to meet at lakeside; before the stroke of midnight Audrey would be lying in a pool of blood with Gerard Parsons standing over her clenching in his hand a knife dripping in blood ─ the same knife he won as a prize hours before at the Regatta Wheel of Fortune.

Earlier that day a gleeful Gerard Parsons was enjoying himself at a Wheel of Fortune. He had purchased tickets, one of which bore the number thirty-two. While waiting for the spinning wheel to stop, his eyes fixated on the assortment of prizes on the shelves awaiting the winner’s choice. There were dishes, cooking utensils, dolls, plush toys ─ and a hunting knife.

The spinning wheel slowed to a stop and the ticket hawker shouted, “The lucky number is ─ thirty-two! That’s thirty-two! Who got thirty-two?”

Gerard Parsons, waving his ticket in his hand, shouted to make sure he was heard among the din of the crowd, “I got it! Here, I got it!” The hawker did not have to ask the winner to consider which prize he wanted, Parsons had already made that decision while the wheel was still spinning.

Pointing to the top shelf, he again shouted, “I’ll take the hunting knife!”

A mere coincidence or did the choice reveal something sinister in his nature? Time continued ticking away and both Parsons and his newly acquired piece of lethal property had a destiny to meet.

Jack Fitzgerald was born and educated in St. John's, NL. During his career he has been a journalist, a feature writer and political columnist with the St. John's Daily News, a reporter and public affairs writer with CJON and VOCM News Services, and editor of the Newfoundland Herald and the Newfoundland Chronicle. During the last years of the Smallwood administration he was assistant director of Public Relations with the Government of Newfoundland and Labrador. He has also worked as assistance officer with the Department of Social Services. Jack Fitzgerald also hosted a regular radio program featuring off-beat Newfoundland stories on radio station VOFM.