Tom Dawe and Gerald Squires speak about the collaborative process 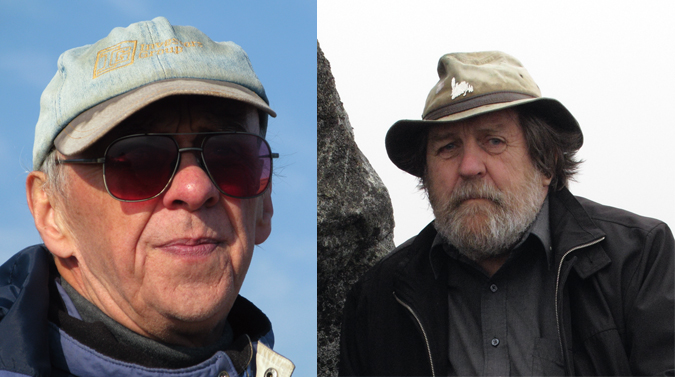 The book, Where Genesis Begins, was a project thirty years in the making

Where Genesis Begins is a collaboration of two of Newfoundland’s foremost artists; Tom Dawe, a profoundly visual poet, and Gerald Squires, a profoundly poetic painter. The book contains thirty-seven poems by Dawe, twenty-nine of which have not been published before, and seventy-one works of art by Squires. ABT’s Stephen Patrick Clare spoke with both men about the process of working together.

SC: Tell me about the genesis of Where Genesis Begins.

GS: Tom and I have known each other for at least thirty years and every time we would run into each other we would have a laugh and agree that we ought to do a book together. Finally, I put my foot down and asked him to send me some of his new poems. Over the course of about two years I would sit with his work and let it speak to me and then try to match those words with what I thought might visually capture their spirit.

TD: Gerry and I talked about a book for years, not sure exactly what that book might be—until about three years ago when he suggested the title, one of his major paintings inspired by lines from Patrick Kavanagh’s To The Man After The Harrow. Suddenly it made perfect sense. I had a dozen poems already completed and dozens more in my head, so I got to work. We planned a collaboration of art and poetry, though the paintings and drawings would not necessarily be exact illustrations of the poems.

SC: What were some of the difficulties you faced in putting a work of this scope and size together?

GS: Aside from finally getting down to actually doing it after talking about it for so long, there were really no major challenges working with Tom. The process was very smooth and natural right from the get-go. I have always admired him as a man and as a poet and I knew that we would likely be able to bring out the best in each other.

TD: For me, poetry is always challenging. Deep in my bones, I know what Auden meant when he said that, upon finishing a new poem, he felt like someone who might never write another. In the last year of the project, I worried even more, especially with a deadline from our publisher. I knew Gerry had an abundance of quality work collected from his prolific career, so I was determined not to disappoint anybody.

SC: What was the most rewarding part of the process?

GS: Watching it all unfold was certainly very exciting for both of us; to see that magic taking place. But I think that getting to know Tom better and seeing how well we work together was reward in itself for me.

TD: Aside from the satisfaction of creating a new body of poetry and watching a beautiful art book take shape, the most rewarding was a closer friendship with Gerry and his wife Gail.

SC: What did you learn during the process?

GS: I learned that even a couple of guys who have been around a while and are getting on in life can still contribute work that is good and important.

TD: I learned much, but the best of it resides in that way of knowing what St. Augustine was talking about when he said: “I know until you ask me.”

SC: What has the response to the work been like so far?

GS: Absolutely fantastic so far. In fact, it has been so good that I am just waiting for the other foot to drop.

TD: The critical response has been excellent—and those who know us, friends and community, are hailing it as a work long overdue.

SC: What happens now? Are you working on something new together?

GS: I have a few solo things on the go, but both Tom and I agree that this experience has been so positive that there is no reason not to have another go at it. So we have started that process already.

TD: We are always thinking about new projects. Right now Gerry is working on seven new drawings for a small, special limited edition of my light verse, Caligula’s Horse and Other Creatures.