A 1960s road trip from Cape Breton to Haight-Ashbury 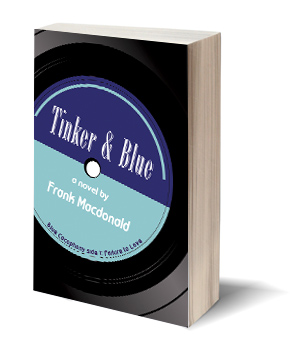 The importance of home, friendship and stories is explored in Tinker and Blue, the latest novel by award-winning author, Frank Macdonald. In this often hilarious coming-of-age, fish-out-of-water romp, the titular characters leave their beloved Cape Breton and, driving a rusty Plymouth, “go down the road” to the Haight-Ashbury neighbourhood of 1960s San Francisco. And like all heroes on an epic journey, they encounter adventure and adversity on the way.

Blue, secure in his beliefs about heritage, religion, human nature and his non-existent musical talent, is looking for stories with which to impress his friends back home. Both naive and wise, Blue never fully comprehends that Cape Breton’s customs and world view are not universally shared while he inherently understands that as human beings, people everywhere operate under the same motivations and emotions. The hardworking, practical Tinker is not so sure of his place in the universe. The scene of their inevitable parting, after numerous trials, including an improbable run-in with a rogue FBI agent, is heartrending.

Through his straightforward characters, simple language and sense of humour, Macdonald delivers powerful commentary on the choices we make in order to survive in this strange, ever-changing world.