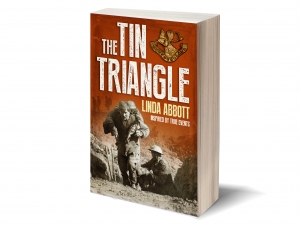 Excerpt from The Tin Triangle

We attended the regatta as a family, with neither of us mentioning the crisis in Europe. The grassy banks of Quidi Vidi were lined with booths and concessions, people milling about them, eager for the boat races to begin.

A variety of cooking smells filled the air: hot dogs, fried onions, hamburgers, french fries. Enticing, inviting. We pushed through the masses, the heat from the sun and the closeness of sweating bodies oppressive. I accidentally elbowed an elderly lady. “Sorry,” I murmured. She hadn’t even noticed.

My father and I walked behind my mother and Joanie. “There’s a restlessness in the air,” he said.

Smiling faces surrounded me, yet the atmosphere was smouldering with tension. “We might be at war, for all anyone knows,” I said.

“Don’t repeat that to your mother,” Dad whispered. She was holding Joanie’s hand tightly. Was she afraid that if she let go her daughter would vanish?

We made it to the water’s edge as the gun fired to start the first race. Will and his brothers were in one racing shell, Frank and Henry next to them. Mr. Burke was a few feet away and waved to us. Of course I had to pretend to cheer loudly for his sons. The crowd held its collective breath as the crews took off, oars splashing into the calm water.

Joanie jumped up and down, clapping her hands, screaming until she went hoarse. My cousin’s team rounded the buoy in third place and quickly pulled into second place. Inches from the finish line, Henry and Frank’s shell glided into first. Frank stood up to shake hands with the skip. An impish smile crept across Henry’s face, no surprise to me, as he shot his hand out and pushed Frank overboard.

Dad slipped away, with me following a few feet behind. He hurried through the spectators, hastily greeting acquaintances and co-workers alike with a brief nod without slowing his pace. More than a little surprised by this, I continued to trail him. He approached Mr. Tucker, a friend who worked at Government House, sitting alone on the grassy hill apart from the crowd. He was staring into the water.

Dad sat down next to him. “Good day, Owen. Enjoying yourself?”

Mr. Tucker turned to Dad, his face a blank. The moment passed, and he ran a hand through his thick, red hair. “Sorry, Tom, I didn’t see you there.”

“You’ve heard something.” My father’s flat announcement betrayed the reason he’d sought him out.

“Afraid so. At nine twenty-five last night we received a message from the Secretary of State for the Colonies.”

My legs almost buckled beneath me, and a middle-aged man asked if I was all right. I nodded, unable to speak.

Dad pulled his knees to his chest and rested his elbows on them. “Britain has declared war on Germany,” he stated quietly.

Mr. Tucker was a widower with five grown sons. “The last British garrison withdrew from Newfoundland over forty years ago. We’re unprepared to fight in a war.”

“There’s the four groups of cadets.”

“They are composed of teenagers led by local men, who for the most part have no military training.”

“They instruct the boys in drill and how to use a rifle.” My father’s shoulders slumped forward. “But you’re right, Owen. There’s no use deluding ourselves. That’s not enough.”

Mr. Tucker made a fist with his right hand and held it up high. “Regardless of our inadequacies, we’ll answer the call to fight for Britain.”

“Indeed we will,” Dad said.

Linda Abbott was born in St. John’s, the eighth in a family of ten children. She is a graduate of Memorial University, with a Bachelor of Arts and Education. The Tin Triangle is her third novel. The Hull Home Fire is her second, and her first novel is the critically acclaimed bestseller The Loss of the Marion. She resides in St. John’s.