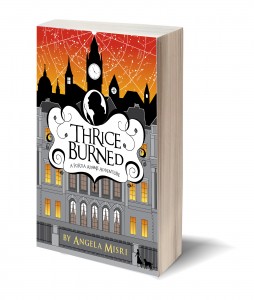 The fire had done its best to leave little with which to identify its victim. The sodden ruins of the small family home burned long into that Wednesday morning, the responding fire crew quickly assessing that this structure was already lost and focusing its energies on saving the buildings on either side. They were remarkably successful in their strategy, I thought as I walked the perimeter in the early morning light. Only the back wall of the house was still standing, the chimney bricks crumbled around in a large pile, the tallest ones reaching the four-foot mark, all entirely blackened by the fire. Evidence of juvenile residents was scattered and scorched all around, with the head of a badly melted doll over there, the metal rattle twisted against its original design over here. I compared this scene to what would be found if my place of residence ever burned to the ground. Filled with books and papers, it would likely burn brightly for half of London to see.

I had been home from Edinburgh for almost two weeks now and had spent most of that time outside of my Baker Street apartment, avoiding … well … everyone.

When I left London on the Flying Scotsman just before Christmas, I had armed myself with evidence that proved my guardian Irene Jones was also the infamous Irene Adler, nemesis and ex-lover of Sherlock Holmes. I was convinced of that fact and was going to use that surety to pursue my suspicion that Irene Adler was also the mother to my late father, Charles Eagle. I didn’t have enough actual evidence to prove this hypothesis but felt sure that the surprise of my discovering the truth about her alias would throw her off, leading to a lowering of defenses and allowing for more truths to be drawn out.

But she had not only prepared for my revelation, she had a surprise of her own. Sherlock Holmes had stepped from the shadows of the living room and into the firelight where she and I sat.

He had, in a few words, confirmed Adler’s true identity and then gone further than even my imagination had ventured, revealing himself as my grandfather. Shocked into silence, and then overwhelmed by the extent of my mother’s secrets,

I had run from the room. Finding myself in the kitchen of this strange house in a strange country, I had burst into tears, mortified but unable to hold it all in any longer. I don’t know how long I stood there with tears pouring down my face, both hands over my mouth to stifle the emotion as best I could, but finally I managed to bring myself back under control, listening to the sounds of a heated argument in the room I had just left. The room that held my grandparents.

“You never cease to amaze me, Sherlock Holmes!” Adler could be heard saying. “She’s a young girl who’s lost both her parents and who was just starting to trust me, to love me. Why you insisted on telling her everything all at once, I will never know!”

“Because you excuse your lies with the consolation of patience and timing,” he replied at a much lower level, though deep enough that I could hear his words clearly. “There is no right time to tell our granddaughter that she has been lied to. That her family was hidden from her. That her birthright was denied.”

“Yes, birthright,” Holmes answered, his voice still cold and even, revealing none of the emotion his former lover was exhibiting. “That girl is exceptional. She is the child of exceptional circumstance and genetics. She will do great things.”

“Unlike our son, you mean?” Adler demanded, making me flinch from a room away.

“Who was sweet and kind and nothing like you?”

I waited for a response from Holmes but heard none.

“And what if the first thing she does is run away from us?” Adler demanded, her voice dropping even lower so that I had to step to the darkened doorway between the kitchen and the parlor to hear.

“What if she does what her mother did? Denies us? Runs away from us?” Her voice quivered with emotion. “I will lose her!”

She had whispered this last sentence, stepping close to Holmes, her stance threatening. He glared down at her, his eyes narrow, his fists clenched.

And that was when I walked back into their presence, my own fists clenched at my sides. “I am not my mother,” I said, my heart aching at that declaration, “and I am not running anywhere.”

Stricken, she placed a hand over her heart, forcing me to say, “I am trying hard to understand your motivations, ma’am, I truly am. But for now, I need to hear from Mr. Holmes. I must know for certain that the two of you are my grandparents. That this is not another lie. I have gone from orphan to granddaughter to I don’t know what now.” I looked to him, meeting his gray eyes directly. “I trust no one right now, Mr. Holmes. Convince me that this is the truth.”

Over the next three hours he did just that, running through his pursuit of this same truth and convincing me of its veracity with evidence both anecdotal and physical. Adler sat through the discussion almost silently but for a sigh once in a while or to relight her pipe.

We finally exhausted both the subject and each other when my grandmother stood up declaring it far too late to continue the discussion, bullying us to bed. I allowed it only because I was drained to the point that I was yawning between sentences, and I collapsed into the unfamiliar bed fully clothed. As I drifted off to sleep I could hear the argument continue below me. Downstairs at breakfast late the next morning, Holmes was nowhere to be seen, and Adler was waiting.

“Where is Holmes?” I asked, noting the uncharacteristic lack of makeup and the shadows under her eyes. She poured a cup of coffee from a silver carafe before answering, her eyes glittering with anger. “He’s gone. He always goes, Portia. Something you must know about your grandfather is that he will always leave.”

Along with my anger, I was sorry for this old woman, and I wrapped my arms around her in silence.

She started in my arms, and then returned the embrace, and we held each other like that until I mumbled, “I’m still angry.”

“But I do love you,” I admitted, and then, with hesitation added, “Grandmother.”

Now, pulling my thoughts back to the present, I stooped to pick up a small shard of glass, running my hands over its usually smooth surface to feel tiny bubbles all over it. I popped it into an envelope I had already labeled ‘Fire in Cheapside’ and continued my circuit.

Angela Misri is a Toronto journalist, writer and mom who has spent most of her working life making CBC Radio extraterrestrial through podcasts, live streams and websites. These days she’s focusing on her writing but taking on freelance and digital projects along the side.