Those Splendid Girls: The Heroic Service of Prince Edward Island Nurses in the Great War 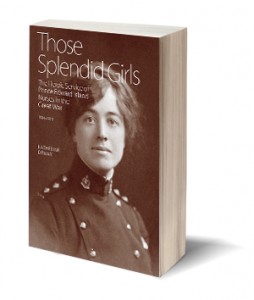 It was a clear night and the Llandovery Castle, painted white with large red crosses on its side and a green stripe signifying that it was a hospital ship, had its lights fully ablaze as it steamed towards Liverpool. The following eye-witness reports are from the recollections of survivor Sergeant A. Knight. He made his testimony to the inquiry that followed the events of the night, led by the Minister of Overseas Military Forces of Canada, Sir Edward Kemp, K.C.M.G.:

Suddenly there was a terrific explosion, badly wrecking the afterpart of the ship. Immediately all lights went out. The signal to stop and reverse engines was without response, all the engine room crew evidently being killed or wounded . . . quickly the captain found that No. 4 hold was completely blown and the ship could not remain afloat. . . .

In perfect order the officer commanding, [Nova Scotian] Lt-Col. T. H. MacDonald paraded his personnel to various boat stations. The extreme slope of the decks . . . the continued forward movement of the ship made launching of life boats a matter of great difficulty.

According to Sergeant Knight, the sergeant in charge of Lifeboat No. 5, Nursing Sister Rena McLean, thirteen other nursing sisters, and a crew of eight were in lifeboat No. 5 under his direction. Two nursing sisters were in night dresses; the rest in uniform. All had lifebelts on. Sergeant Knight described their launch: “Our boat was quickly loaded and lowered to the surface of the water.” But, he explained, they had great difficulty in freeing the ropes from the boat and broke two axes in the process. Other problems interfering with the launch were the forward motion of the ship and the choppy seas. In an attempt at trying to prevent the lifeboat from crashing against the side of the listing and sinking ship, they broke the oars. Finally the ropes were freed but the lifeboat began to drift toward the stern of the ship, with the crew having no oars to steer away from the boat. The nurses were quiet and composed. All onboard could see the disaster coming. Finally Matron Fraser put words to what all must have been thinking as they continued to drift toward the stern of the Llandovery Castle: “Sergeant, do you think that thereis any hope for us?”

No sooner had he uttered the word “No” than the poop deck of the Llandovery Castle broke off, and the nurses’ lifeboat was sucked into the vacuum, throwing the nurses into the water and immediately pulling them under. According to Sergeant Knight, they never surfaced. He testified that he was sucked under three times but managed to resurface and hang on to debris.

Many members of the crew were still afloat in the water and Captain Sylvester was busy rescuing survivors when a shot was fired across the bow of his lifeboat. He was ordered onto the submarine U-86 by Captain Patzig. First the German captain insisted that the Llandovery Castle had American Flying Officers on board. When that proved to be incorrect, he then accused them of carrying ammunitions. The Canadian officers denied all those claims. They returned to their lifeboat and continued their rescue attempts. To the horror of the survivors in the water, the submarine cruised the debris field, attempting to ram and sink the lifeboats. Then the Germans attempted to machine-gun any survivors they could in an attempt to destroy all the evidence of their “heinous crime.” One lifeboat carrying twenty-four survivors managed to get away and was rescued two days later by HMS Lysander off the Irish Coast.

All but seven of the ninety-seven members of the medical unit perished in the sinking. There was a total loss of 234 lives. Also lost was Islander James P. Foley, son of Edward Foley of the south shore. His wife was Gertrude McDonald of Charlottetown. James had fought in the major battles of the war and was severely gassed at Hill 70. He was convalescing in England and was assigned to light duties as a caterer onboard the Llandovery Castle as a part of his rehabilitation.

One macabre scene was forever imprinted on the brain of Kenneth Cummins, a fifteen-year-old midshipman on his first naval voyage of the war. He described the horror of running across the nurses’ corpses floating in the water: “Their aprons had dried out in the sun and were blown up by the wind like little sails.” The naval ship was unable to slow down or break formation to pick up the bodies, for fear of submarine attack.

It is unclear when Nursing Sister McLean’s family first heard the news of her death. However, it was abundantly clear that six days after the sinking, her father John McLean, now a Canadian Senator, had made several inquiries but had still not received any information. By noon the same day, Senator McLean had received a cable from a Mrs. (Dr.) Allison of Halifax with some encouraging news: “Boats got away safely, were provisioned and are in a commerce lane and will probably be picked up. Captain speaks hopefully of their safety.” In the face of no information and possibly misinformation, what was a distraught family to believe?

Still on the same day, 3 July, in an unusual break with wartime journalistic protocol, the Island Patriot attacked the military authorities with this scathing rebuke:

Eleven days after the tragedy, Senator McLean received the news that no father ever wants to hear. His daughter was presumed dead. On 8 July, Senator McLean informed the Island Patriot that he had received cables from Sir George Perley, Canadian High Commissioner to London, and from the headquarters of the Red Cross in London stating that all hope had been abandoned on there being any further survivors of the Llandovery Castle.