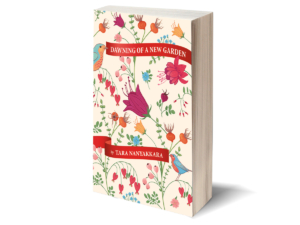 The novel Dawning of a New Garden begins at a nursing home in St. John’s called Sunset Ridge, where an early evening sun dissolves into a soft glow. “The day that started off new and fresh was old and tired,” writes the book’s author, Tara Nanayakkara. And so it is that a new day — or reinvented garden — is on the horizon, yet to be realized.

Our protagonist is a 35-year-old freelance writer named Priya, who, apart from two girlfriends is alone in the world. Her parents died 10 years earlier; her husband, a mere few months earlier. Looking to take her mind off her grief, she is connected with a widowed nursing home resident named Jeevan, from her father’s native Sri Lanka. Priya and Jeevan become fast friends and she calls him “Uncle,” in part a South Asian custom to show respect for an elder but also because she feels he is the closest she has to family.

Within the first five pages of the 240-page novel, Jeevan’s nephew, Suresh, shows up at the nursing home, out of the blue from Toronto. A love-hate tension is set up between Priya and Suresh, which slowly builds in the ensuing pages. “Maybe there’s a deep dark family secret lurking in the background,” says one of Priya’s friends early on, foreshadowing the drama to come.

Several contrasting themes are debated throughout the plot, such as being a single parent versus marrying someone you don’t love, arranged marriages and love-based matches, setting Sri Lankan customs beside Canadian ones, overcoming challenges vs. succumbing to them. Priya is writing for a New Age magazine; Suresh is a journalist for a Christian publication.

Indeed, while Priya’s friends Meg and Amina debate her future, she says she feels like a spectator on The View, an American talk show hosted by a panel of women who offer their take on the day’s news.

Memories of the past are conjured by current events — for example Priya recalls her engagement to her deceased husband, Gabe, after watching Suresh and his mother quibble over a suitable engagement ring for her — as she tries to make sense of her life.

The story is marbled by a sometimes scented gastronomic aspect, such as triangles of vanilla bean cheesecake, rice and curry, pepper-crusted Atlantic salmon fillet, tomato bisque, warm scones … Best not to read while hungry.

While Priya initially finds sanctuary in the home she shared with Gabe and in the garden that he built, in communion with a statue of the archangel Gabriel, as the book ends she is ready for the next chapter of her life to begin.

Dawning of a New Garden
by Tara Nanayakkara
Inanna Publications

Heather White is a writer and editor based in Halifax, NS.