The Winter Issue of Atlantic Books Today is Here 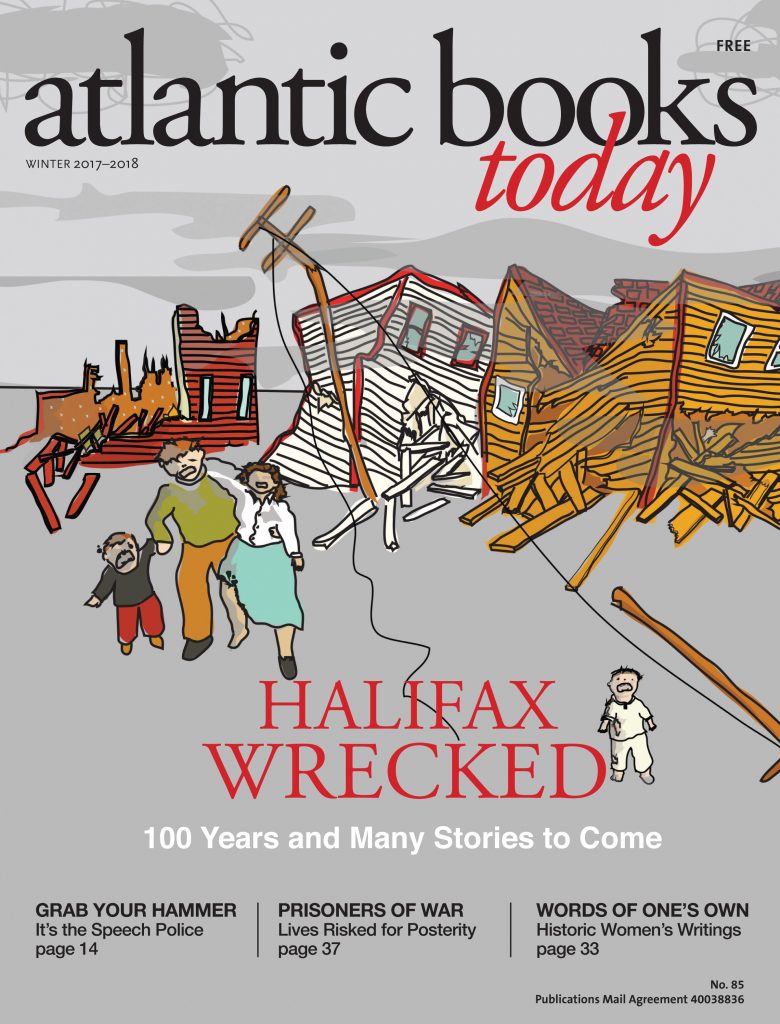 I must confess I’ve never been that taken with the Halifax Explosion, which is regrettably my hometown’s claim to fame. My grandfather was the only person I knew who’d been alive at the time of the event and he was toddling in Brookfield, blissfully unaware I assume. When we learned our Explosion theology in school it never occurred to me to ask him about ancient history like that.

As an adult our fascination with the explosion has struck me as retrospective disaster porn, morbid at best and sensationalist at worst. It seems, given the stack of new books on the topic released for its centennial, that I have long been an anomaly with my disinterest. And it was that volume of new verbiage from local, national and international publishers that finally piqued my interest. I was particularly taken by two new books–Michael Dupuis’ Bearing Witness and Katie Ingram’s Breaking Disaster– examining how the media represented (and sometimes misrepresented) the events of December 6, 1917 then and since. I can only imagine myself in that position, my little world flattened and having to make sense of it by deadline with nothing resembling the connecting technology in our pockets today.

These are two of six non-fiction books considered by Barry Cahill in his cover story (page 16), which considers our Explosion obsession and makes important distinctions between the violent topicality of the event, its aftermath of loss, resilience and recovery, and the rarely noted underlying cause beneath all the finger pointing and defending of individuals: war.

Violence and war are what stay with me years after reading Hugh MacLennan’s classic Explosion novel, Barometer Rising, and Jon Tattrie’s more recent Black Snow. It fascinates me that in fictional representations of the disaster, its link with a rather futile war is a constant backdrop. Carol Bruneau (page 22) explores the act of imagining late 1917 Halifax, including in new novels by Steven Laffoley, Alison Watt and Julie Lawson, and the insights it provides that even the most meticulous non-fiction account cannot.

Somehow though, above the high-culture initiatives of novelists and historians, children’s literature–including new work from John DeMont (whose illustrator and daughter, Belle DeMont, also drew our cover illustration), Marijke Simons and Laurie Swim–seeks to learn not merely the facts of a disaster but the lessons we require to heal and move forward from humanity’s great blunders.

“I wish to keep a record” edited by Gail Campbell
400 Years in 365 Days by Leo Deveau
6.12.17 by John Boileau
A Blinding Light by Julie Dawson
A Halifax Christmas Carol by Steven Laffoley
All Around the Circle by Cara Kansala
Bag of Hammers by Edward Riche
Beachbound by Junie Coffey
Bearing Witness by Michael Dupuis
Betrayal of Trust by Joel Zemel
Big Business and Hitler by Jacques R Pauwels
Breaking Disaster by Katie Ingram
Camped Out by Daphne Greer
Canada’s Worst Disaster by John U Bacon
Dazzle Patterns by Alison Watt
Death at the Harbourview Café by Fred Humber
Deer Island Mystery by Don Kelly
Develop or Perish by Gerhard P Bassler
East Coast Crafted by Whitney Moran and Christopher Reynolds
Explosion in Halifax Harbour by Dan Soucoup
F Bomb by Lauren McKeon
Fear From a Small Place edited by Dave Stewart
Green Plate Special by Christine Burns Rudalevige
Henrietta’s Nightlight by Alice Whitney
Hope and Survival: A Story of the Halifax Explosion by Laurie Swim
Jane Austen’s Transatlantic Sister by Sheila Johnson Kindred
Jumped In by William Kowalski
LM Montgomery and War by Andrea McKenzie and Jane Ledwell
Lost in September by Kathleen Winter
Love and Laughter in the Time of Chemotherapy by Manjusha Pawagi
Mischief by John Terpstra
Most Anything You Please by Trudy J Morgan Cole
New Brunswick at the Crossroads by Tony Tremblay
Peninsula Sinking by David Huebert
Plank’s Law by Lesley Choyce
Pop Quiz by Tom Ryan
Run Hide Repeat by Pauline Dakin
Search Box Bed by Darryl Whetter
Skeet Love by Craig Francis Power
Smaller Hours by Kevin Shaw
Take Off to Tantramar by Barr, Landry and Weatherbee
Tappan Adney and the Heritage of the Saint John River by Keith Helmuth
The Adventurer’s Guide to Dragons by Wade Albert Brown
The Boat People by Sharon Bala
The Disappearing Boy by Sonia Tilson
The Endless Battle by Andrew Flanagan
The Flying Squirrel Stowaways by Marijke Simons
The Gravel Pit Kids by Geraldine Ryan-Lush
The Kingdom of No Worries by Philip Roy
The Legacy Letters by Janice Landry
The Little Tree by the Sea by John and Belle DeMont
The Pregnant Pause by Jane Doucet
The Reconciliation Manifesto by Arthur Manuel and Grand Chief Ronald Derrickson
The Things Owen Wrote by Jessica Scott Caron
Towards an Encyclopedia of Local Knowledge by Pam Hall
Uncertain Weights and Measures by Jocelyn Parr
Unpacked by Mo Duffy Cobb
Wartime by Edward Butts

If you want to purchase an annual print subscription for $16, get in touch with us. And watch for it in your local newspapers, bookstore, library and coffee shop, starting November 4.