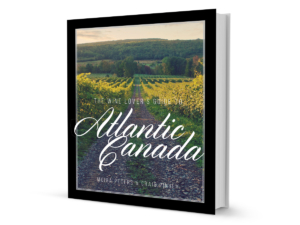 As the Canadian wine industry grows, it has become increasingly pivoted on the wines of British Columbia’s rugged and dramatically changing climes and Ontario’s collection of viticultural pockets, where Burgundian, Alsatian and German styles of viticulture express themselves in New World Soils.

The Wine Lover’s Guide to Atlantic Canada does not entirely resemble other dense, esoteric wine texts. It attempts to capture the aesthetics of the region through a photographic and factual presentation of a place quickly being recognized as a producer of fine wine (especially sparkling wine).

Because each province’s strategy for controlling the promulgation of alcohol does not necessarily facilitate cooperation, many Canadians west of the St. Lawrence might be shocked to encounter a thriving wine industry spanning Eastern Canada. It is not yet a commercial dynamo though, and information on the producers is scarce.  Unless you are lucky enough to live in a province with a control board savvy enough to have negotiated wine from a larger producer (like Jost or Benjamin Bridge), or a winery is staring you in the face as you drive through Gaspereau Valley, the opportunity to try these wines is rare.

It is getting better, however.  Most of the East Coast remains a wine destination for vacationers and lucky locals. As the reputation of the wine grows, so does the demand. Information about what sort of wines are available in each region used to be limited to a collection of vague online articles and academic texts aimed at botanists and ampelographers studying the soil (too academic for the average enthusiast).

The Wine Lover’s guide to Atlantic Canada fills this demand for information at just the right time in the region’s development. The volume reminds me of the digest written by Rod Philips to comprehensively lay out Ontario’s wine regions in context with one another.  Both volumes provide a complete picture: there is useful information about style, grape varietals, fruit wines and climate. There are also charming anecdotes from the proprietors and winemakers about where they live and what they do.

All Canadian wine regions have had their difficulties reaching people’s dinner tables. The book emphasizes the struggles faced by a new wine region, and the prejudice and invective it faces. This phenomenon is something observable and familiar to those who have watched Ontario and British Columbia grow and mature over the last three decades. It would have been observable in the mid twentieth century as people scoffed at the idea of Australia producing anything resembling a fine consumer luxury. The same goes for the South African Cape and Argentina.

Atlantic Canada’s wine regions are not quite like other wine regions.  They are committed to what grows well in their soil.  There is even a commercially dedicated breeding program in Kentville, Nova Scotia, focused on discovering what possible varieties can grow in the soils of Nova Scotia, New Brunswick and elsewhere.

New Brunswick, Newfoundland and Labrador are all mentioned for their thriving fruit wine industries, which cover a range of styles from sweet to dry or table wine to distilled spirits. But The overwhelming majority of the book, which is just over two hundred pages, focuses on Nova Scotia.  The other regions combined take up roughly the same amount of space. This can be forgiven, though. Nova Scotia is the innovative engine responsible for the recent surge in popular interest for East Coast wines.

Moira Pinhey and Craig Peters knew exactly the digestible details to include so as to capture the attention of fellow wine enthusiasts. This book would also be a suitable conversation piece for someone who appreciates the beauty of the East Coast. The charming landscapes and abstruse nature of the wineries make The Wine Lover’s Guide to Atlantic Canada a compelling and fast read.

Greg is a self-styled "wine raconteur" interested in the education and appreciation of wine and other consumer luxuries. He has studied with the Wine Council of Ontario, the Wine and Spirit Education Trust and The Wine Scholar Guild, and is currently engaged in a graduate degree focusing on the risk and regulation of controlled substances.