The Strength of Rita MacNeil

The unlikely trailblazer, whose father prayed for her death, opened the door for countless Atlantic musicians

When Rita MacNeil died in 2013, of complications following surgery, flags flew at half-mast, and tributes poured forth. Cape Breton’s First Lady of Song had had a long and storied career, one that started in the women’s movement in Toronto in the 1970s, made the requisite stops on CBC television, where MacNeil hosted a hugely successful variety show, at the Juno and Gemini Awards, on international Top 40 and Country charts, and on to the Orders of Nova Scotia and the Canada.

Every story about MacNeil noted that she was an “unlikely” star, because of her cleft palate and her size. She was known also for being tremendously shy and yet stepping out on stage — barefoot — and belting out her songs with her unparalleled voice. These are Rita MacNeil facts even the most casual fan could likely cite.

I’m Not What I Seem: The Many Stories of Rita MacNeil’s Life by Charlie Rhindress takes these facts and many more about MacNeil’s life and fleshes out the stories beneath them. Rhindress is well versed in those stories, having written the play Flying on Her Own, which premiered at Live Bait Theatre in Parrsboro in 2000.

In this new biography, Rhindress writes of his own awakening to MacNeil’s music, when he was a Maritimer far from home. He listened to MacNeil sing “I’m Not What I Seem” and felt as though she sang directly to him, that there was much more to her than met the eye. That understanding led first to the play — the writing of which MacNeil chaperoned, encouraging Rhindress not to let her off the hook for her failings, nor show her in a better light than she felt she deserved — and from there to this posthumous biography.

Rhindress takes a chronological approach, from MacNeil’s birth (she arrived with a badly cleft palate, and her father prayed for her death), through her struggle to find her place on the musical stage, to the ebb and flow of her career, to her death. Rhindress relies on his own interviews and conversations with MacNeil and those who knew her, along with archival material and MacNeil’s autobiography, co-written with the poet Anne Simpson and published in 1998. 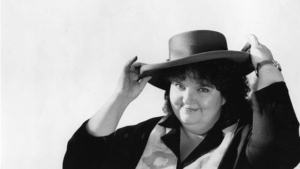 Any biographer worth his salt reflects on his subject’s legacy. Rhindress puts it: “Rita MacNeil was a trailblazer. For both her involvement in the women’s movement and for helping to create a music industry on Canada’s East Coast … At 68 and in ill health, when she could easily have rested on her laurels, she was working with young musicians to create a new sound, to take her music in another direction.”

Kim Dunn, who played keyboards in MacNeil’s band for 14 years and who keeps her spirit alive hosting a concert series at Rita’s Tea Room in Big Pond, agrees MacNeil paved a road for Cape Breton artists to take their music to the world — without having to go down the road to do it.

“I think it’s certainly a big part of her legacy,” he says over the phone from his home in Halifax. “And she did it in a way that was so pure and true to form. All the while being very supportive.”

If MacNeil knew her band members were trying to also have a solo career, she would make sure they sang a song or two of their own during her concerts and she’d invite them to sell their merchandise alongside her own. 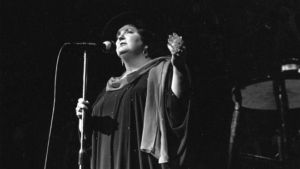 “She was very generous with her time and her platform. You might think that somebody who broke the mould the way she did — she didn’t have the image in the industry others had — you might have thought she had more reason to be overprotective of what she had,” Dunn says. “Lots of people are very insecure, but she just let it all out, she wasn’t worried about being upstaged or anything like that. I always interpreted that as another sign of strength in her.”

As for what MacNeil might think of a biography being written, Dunn imagines she’d say, “Oh my God, darlin’, people must have better things to do with their words.”

And yet, fans of MacNeil’s music, or indeed of east coast music, will beg to differ.