The Story of Traditional Fiddling on Prince Edward Island 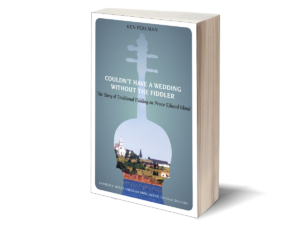 If you’ve spent any amount of time on Prince Edward Island, you’re probably aware that it is home to a lively fiddle culture. This book, written by Ken Perlman, a noted folk musician and music scholar based out of the United States, contends that the province “is home to one of the oldest, strongest, and most vibrant fiddling traditions in North America.” Using some 150 interviews with local musicians collected between 1991 and 2006, the book examines the societal role of the fiddler, the transmission of musical knowledge and the ebb and flow of the instrument’s popularity.

As Perlman notes, fiddle music came to Prince Edward Island in the late 18th century with its early Scottish settlers. Further immigration from the fiddle hotbeds of Ireland and the Scottish Highlands cemented its place, and in time the music could be found in all communities throughout the Island, including the Evangeline region, which is noted for its sizeable Acadian population.

In the years before television and rock n’ roll radio, fiddlers played a central role within the local communities’ social life, often being called upon to perform multiple times per week. Unpaid for their hours of work, aside from some food and alcohol, fiddlers were expected to head off to work, often at the crack of dawn as farmers or fishermen, and were critiqued if they over-imbibed the night before. It sounds unfair – and it was – but it was perceived to be the fiddler’s duty, given the fact that they were blessed with “the gift.”

Following the introduction of rural electrification and the popularization of television, Perlman explains that the role of community fiddlers declined. Many hung up their bows, and few young Islanders took up the instrument. As such, by the 1970s the province’s fiddle tradition appeared to be on life support. Despite dire prognostications, the music has since enjoyed a revival, thanks in large part to the work of groups such as the Prince Edward Island Fiddlers’ Society, and events such as the Rollo Bay Fiddle Festival. By the 1990s young people were once again picking up the instrument, and paying opportunities became more prevalent, leading to the thriving ceilidh scene found today.

Couldn’t Have a Wedding Without the Fiddler: The Story of Traditional Fiddling on Prince Edward Island
by Ken Perlman
University of Tennessee Press