The Spring/Summer 2017 issue of Atlantic Books Today is here 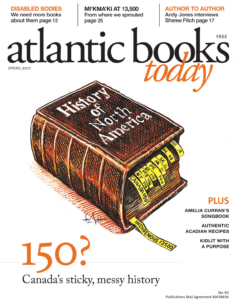 “Canada 150 doesn’t mean much here,” a Newfoundland publisher recently said to her counterparts in Nova Scotia, New Brunswick and PEI. The Prince Edward Islander sympathized. Despite that big-deal conference in Charlottetown in 1864, PEI didn’t join confederation until 1873 and it didn’t exactly show up with a party hat on. It couldn’t afford one really; it was on the verge of economic collapse thanks to railway debt.

Inevitably, the publishers’ conversation turned toward the absent Indigenous perspective. Absent this particular conversation, that is. Many Indigenous voices, including that of Elsipogtog Warrior Chief John Levi, have risen quite clearly denouncing the idea that colonial history should be feted at all.

Beyond the seemingly arbitrary number (150 applies to only four provinces), what does our relatively recent history as a nation tell us about ourselves today? These are questions historian Margaret Conrad and Mi’kmaq museum curator Roger Lewis explore in this issue. They draw on a long list of Indigenous and settler writers. They explore how history is being told in 2017 in books like Jeffers Lennox’s Homelands and Empires and economic arguments like Donald Savoie’s Looking for Bootstraps, or political think pieces like Ed Whitcomb’s Rivals for Power.

Our writers also look at what our art–visual and literary–says about Canada and how we define it at this stage of our history, including the biting satirical cartoons of our cover artist, Michael de Adder.

The stories herein are by no means a comprehensive history; this is a magazine about books after all. But the sheer diversity of these books shows that there is still no authoritative idea of what Canada is. Whatever number you use, 150 or 150,000, and whatever your sense of patriotism, history is worth rethinking again and again, right on into Year 150,001, and 150,002…

Read the digital copy of the entire magazine here. If you want to purchase an annual print subscription for $16, get in touch with us. And watch for it in your local newspapers, bookstore, library and coffee shop, starting May 10.