The Spring 2018 Issue of Atlantic Books Today is Here 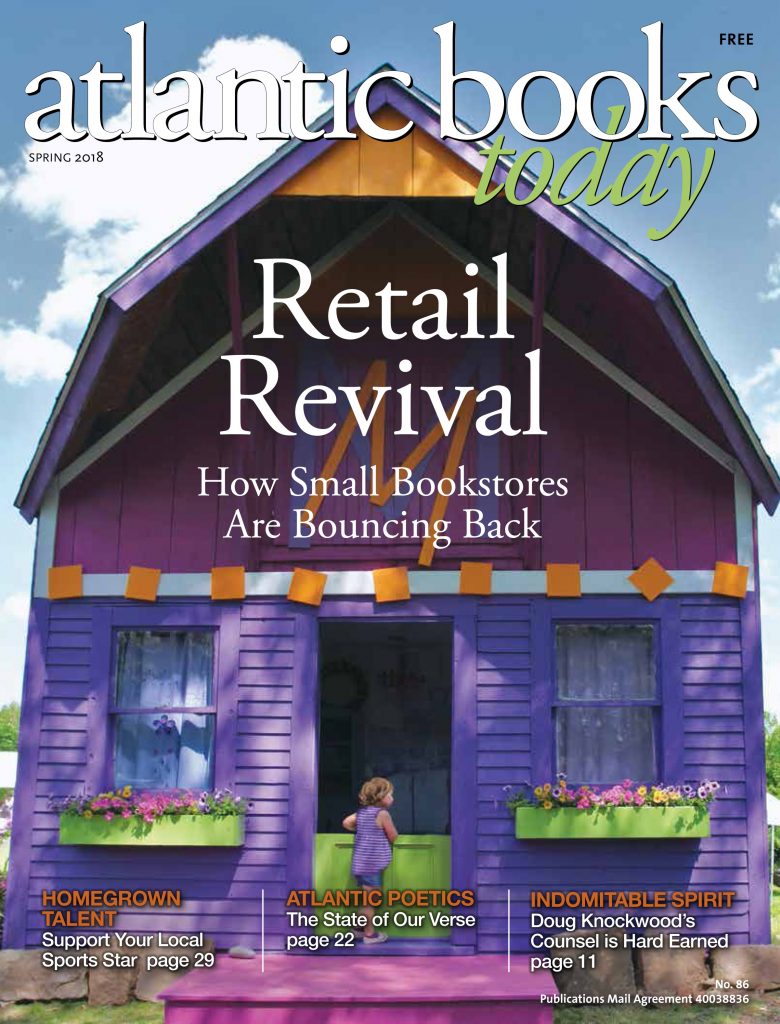 Like many a good novelist, we at Atlantic Books Today strive for a balance between darkness and light—at times shining the light on humanity’s failings, at other times just basking in sunshine. In every case, we aim for honest, engaging talk about books. The specific resulting contents vary a great deal. Our spring issue is a good example.

In our second feature, Evelyn White uses Ingrid Waldron’s There’s Something in the Water and Ted Rutland’s Displacing Blackness to illuminate a disturbing history of shaping our cities and towns through a racist lens. And in this time charged by intensified, honest open discussions—and calls for action—around #metoo and #MMIW, our reviewer Erin Wunker considers the weight of Elaine Craig’s Putting Trials on Trial: Sexual Assault and the Failure of the Legal Profession, and Patty Musgrave takes heart that Rachel Bryant’s The Homing Place: Atlantic Indigenous and Settler Literary Legacies exists and is a reminder that reconciliation requires settler Canadians to do a whole lot of work.

In our cover story, it’s a case of “book retail is dead; long live book retail!” There is good news in the form of brightly coloured and beautiful storefronts selling real, tactile books. Thanks to an incredibly committed group of entrepreneurs, independent bookstores are thriving as more than just businesses. They are serving as community gathering places and doing much better than most people think.

This summer I highly recommend heading to your local bookstore, and not just to shop. You’ll be surprised what you might find, maybe a game of chess with a new friend, the best Nanaimo bars west of Nanaimo, and maybe even a friendly donkey or two.

Lastly, given that it’s spring, which can only lead to summer, our issue is bookended (that’s right I did) with stories about the Atlantic Book Awards, libraries and books to help you find your way to some of the best outdoor attractions in the region, from the Bluenose II to little-known hiking trails and waterfalls.

100 Things You Didn’t Know About Atlantic Canada by Sarah Sawler
60/20 by Andrew Steeves
Alexander Graham Bell: Spirit of Innovation by Jennifer Groundwater
All Manner of Tackle by Brian Bartlett
Annie Pootoogook: Cutting Ice by Nancy Campbell
Bay of Hope: Five Years in Newfoundland by David Ward
Ben Tucker’s Truck by Azzo Rezori
Blue Waiting by Wiebe and Snowber
Bluenose: On Board a Legend by Devyn Kaizer
Branches Over Ripples by Brian Bartlett
Caplin Skull by MT Dohaney
Catch My Drift by Genevieve Scott
Catching the Light by Susan Sinnott
Displacing Blackness: Power, Planning & Race in Twentieth-Century Halifax by Ted Rutland
Doug Knockwood: Mi’kmaw Elder, His Story by Doug Knockwood & Friends
Everybody’s Different on Everybody Street by Sheree Fitch & Emma FitzGerald
Faunics by Jack Davis
Field Guide to Newfoundland and Labrador by Michale Collins
Following the River by Lorri Neilsen Glenn
From Black Horses to White Steeds by Laurie Brinklow and Ryan Gibson
Hiking Trails of New Brunswick, 4th Edition by HA and Marianne Eiselt
How to Talk Nova Scotian by Vernon Oickle
Humpback Whale Journal by Alan Syliboy
Hysteria by Elisabeth di Mariaffi
I Love You Like… by Lori Joy Smith
I Remain Your Loving Son by Ennis and Wakeham
Jack Fitzgerald Treasury of Newfoundland Stories by Jack Fitzgerald
L’Acadie en barratte by Basque & Leger
Lucy Cloud by Anne Levesque
Mallard Mallard Moose by Lori Doody
Marry, Bang, Kill by Andrew Battershill
Mi’kmaw Animals by Alan Syliboy
Nova Scotia at War 1914-1919 by Brian Tennyson
Pay No Heed to the Rockets by Marcello di Cintio
Penelope by Sue Goyette
Piper by Jacqueline Halsey
Putting Trials on Trial: Sexual Assault and the Failure of the Legal Profession by Elaine Craig
Rescue at Moose River by Blain Henshaw
Ritual Lights by Joelle Baron
Secrets of Sable Island by Marcia Pierce Harding
Signs of Life by Gerri Frager
Something is Always on Fire by Measha Brueggergosman
The Democracy Cookbook edited by Lisa Moore & Alex Marland
The Frame-Up by Wendy McLeod MacKnight
The Golden Boy by Grant Matheson
The Goodbye Girls by Lisa Harrington
The Grand Tour by Dave Quinton
The Homing Place: Atlantic Indigenous and Settler Literary Legacies by Rachel Bryant
The Honey Farm by Harriet Alida Lye
The Long Way Home: A Personal History of Nova Scotia by John DeMont
The Thundermaker Mi’kmaw translation by Alan Syliboy
The Way We Hold On by Abena Beloved Green
There’s Something in the Water: Environmental Racism in Indigenous and Black Communities by Ingrid Waldron
Through Sunlight and Shadows by Raymond Fraser
To Live and Die in Scoudouc by Herménégilde Chiasson translated by Jo-Anne Elder
Too Unspeakable for Words by Rosalind Gill
Toward the Country of Light by Allan Cooper
Unchained Man by Maura Hanrahan
Waking Up in My Own Backyard by Sandra Phinney
Waterfalls of Nova Scotia by Benoit Lalonde
Where Duty Lies by John Cunningham
Winners: The new generation of Maritime sports stars by Philip Croucher