The Premiers Joey and Frank: Greed, Power, and Lust 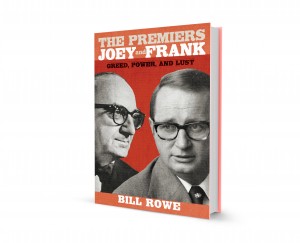 After graduating from Memorial in 1962, I spent the summer break working on a survey crew in the Bay of Islands before going to law school that fall. Diefenbaker called a federal election for June and a huge Liberal rally was organized in Corner Brook. Provincial Premier Smallwood, and not the federal Liberal candidate, was billed as the chief speaker.

At the rally, I would witness again what I had remarked before, and would confirm many times in the future: Joey loved to—he lived to—personalize his politics by demonizing his enemies. I saw it in the IWA strife when, among other personal attacks, Joey had somehow linked Landon Ladd to the then notorious American Teamsters Union: I recall Joey looking up at the gallery of the House of Assembly one day when Larry Daley, the head of the Teamsters in Newfoundland, was sitting there. His very presence seemed to galvanize Joey to an outburst: the Teamsters were infamously led in the States by Jimmy Hoffa, who was suspected of Mafia connections—ergo, Landon Ladd of the IWA, who was Daley’s buddy, was a gangster, too. It was a line of baseless logic designed to add to the demonization and destruction of Ladd personally and had nothing to do with the local issues at stake in the strike.

I would see and hear the same in his private vilification of Peter Cashin years after their public political scraps, even after Joey had given Cashin a plum job, as payback for Cashin having run as an independent in a federal election to split the Opposition vote and push Joey’s candidate to victory. Cashin’s new job entailed blasting off a city-wide siren now and then as a sort of fire drill warning that St. John’s was under nuclear attack. Joey would sometimes bring up Cashin’s mental state during conversations, stating that Peter had a steel plate in his skull as a result of World War I wounds and was completely off his head and indeed a dangerous, raving lunatic.

I would hear similar demeaning of others for years to come.

Born in Newfoundland, Bill Rowe graduated in English from Memorial University and attended Oxford University as a Rhodes Scholar, obtaining an Honours MA in law. Elected five times to the House of Assembly, Rowe served as a minister in the Government of Newfoundland and Labrador, and as leader of the Official Opposition. He practised law in St. John’s for many years, and has been a long-time public affairs commentator, appearing regularly on national and local television, as well as hosting a daily radio call-in show on VOCM and writing weekly newspaper columns. Rowe has written eight books: Clapp’s Rock, a bestselling novel published by McClelland and Stewart and serialized on CBC national radio; The Temptation of Victor Galanti, a second novel published by McClelland and Stewart; a volume of essays on politics and public affairs published by Jesperson Press of St. John’s; the critically acclaimed political memoir Danny Williams: The War With Ottawa, which appeared on the Globe and Mail’s bestsellers list in 2010; Danny Williams, Please Come Back, a collection of newspaper articles covering social, political, and economic issues; Rosie O’Dell, a critically acclaimed crime novel published by Pennywell Books, a literary imprint of Flanker Press; and The Premiers Joey and Frank, which was a Globe and Mail bestseller in 2013, and which the Hill Times selected as one of the Best 100 Books in Politics, Public Policy, and History in 2013. Rowe is a member of the Writers’ Union of Canada and has served on the executive of the Writers’ Alliance of Newfoundland and Labrador. He is married to Penelope Ayre Rowe CM of St. John’s. They have a son, Dorian, a daughter, Toby, and three grandchildren.