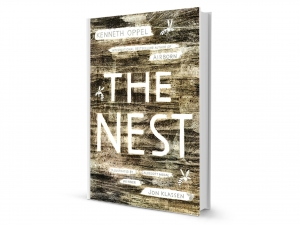 Nature is terrifyingly unnatural in The Nest, a haunting new novel by award-winning author, Kenneth Oppel. Steven’s parents are distraught when his baby brother is diagnosed with a congenital defect. Preoccupied and consumed with worry, their world suddenly seems to revolve around “the baby,” and Steven feels neglected and alone. Plagued by a history of disturbing nightmares, Steven begins to dream about other-worldly creatures who promise to fix things. But Steven soon discovers that their intentions are sinister, and his brother is in danger. Surrounded by disbelieving adults, Steven is the only one who can save his brother, and must decide which he wants more – the illusion of normal, or an imperfect reality.

Childhood insecurity and psychological trauma become the stuff of urban legend in The Nest, where Jon Klassen’s eerie line drawings and Oppel’s strange imaginations create an atmosphere that is positively Hitchcockian. Winner of the 2004 Governor General’s Award for children’s literature, Oppel lives up to his reputation as a master storyteller with this deceptively simple little novel whose short length disguises a cleverly crafted thriller. Faceless depictions of characters, a nameless baby, and the mysterious Mr. Nobody are all hints that this is not just gimmicky horror, but a delicately layered story, whose main character struggles with identity and acceptance when his version of normal is challenged. A middle-school tale with a nightmarish vibe, The Nest is gothic lit for a younger audience: captivating, terrifying, and incandescently lovely.

This review was reprinted under a Creative Commons License. Courtesy of the National Reading Campaign.

Karen Doerksen lives in Sherwood Park, Alberta with her husband and four children. She works for the Edmonton Public Library, and holds a master’s degree in Library and Information Studies from the University of Alberta.