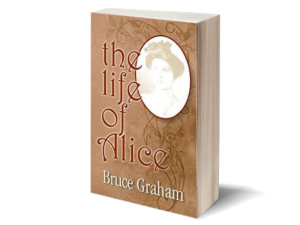 “You start with what you know. There was a beautiful young woman who grew up on a Nova Scotia farm, became a schoolteacher, and fell in love.”

Author and playwright Bruce Graham has published historical fiction before, and here his subject is the life of a family ancestor: Alice Eudora Graham Lewis. A farmer’s daughter in Cumberland County, Nova Scotia, she became a schoolteacher in Pembroke and Lynn Mountain. Not an unusual arc for an intelligent young woman of her cusp-of-the-20th-century time. But Alice also fell in love with, and married, a much older man – who was divorced. That was then an extremely unorthodox social situation and it caused her family to disown her.

How did that happen? Didn’t Alice (who was very pretty) have any other offers? How much did she suffer for her choice? How did she cope? These are the questions that vexed Graham, and which he pursued.

For clues, he researched in archives and small community museums. He traced, and corresponded with, distant family members. He even located a few precious letters written at the time.

The result is a hybrid of historic data and historical enactments. The story unfolds from different perspectives, and includes many characters, two of whom are upfront fictional. Graham has also fashioned dialogue and created atmosphere, both external and internal. We are aware, for example, of Alice’s inner musings, hopes and worries. At times we also hear the voice of the author.

As a biography, it is re-imagined with detail. Many families have a teasing, almost-hidden secret like this. But they don’t always include such a dogged, able sleuth. As Graham deduces from his investigations:

“From what I’ve learned about Alice, she was a most unusual woman.”

The Life of Alice
by Bruce Graham
Pottersfield Press