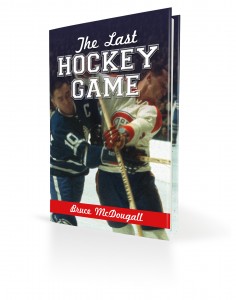 *This excerpt contains a four-letter word that some readers may find offensive.

John Ashley, the referee, stood motionless at the centre of the rink. He moved his right hand forward as if he was brushing lint off his pantleg, spread his fingers, and let the puck drop to the ice.

With stickblades flicking like lizards’ tongues at a bug, Ralph Backstrom and Pete Stemkowski stabbed at the falling puck. Leafs winger Jim Pappin darted toward the puck, chased by grim-faced John Ferguson. Ashley backed away from the commotion. The game was on.

Pappin pulled the puck out of the thicket of legs and skates and flicked it blindly toward the Canadiens’ end of the rink. When he turned to follow it, he ran smack into Terry Harper, the defenceman, who had skated toward centre, turned sideways and bent forward to block his way. Pappin vaulted across Harper’s back, landed face-down on the ice, regained his footing and started skating again.

Young linesman Brent Casselman straddled the blue line beside the boards. When the puck crossed the line in advance of any of the Leafs players, Casselman held out his arms like Christ on a crucifix to indicate that the play was onside.

Gump Worsley, the Canadiens’ goalie, guided the rolling puck away from the goal as Stemkowski chased Jacques Laperriere to the puck.

“Man on you, Lappy,” Worsley shouted.

Fired by adrenaline, charged by the noise of sixteen thousand screaming Leafs fans, hearing the skateblades of his two-hundred-pound pursuer chopping into the ice behind him, Laperriere remained as calm as a gardener tending to a tomato plant. With the puck on his stick, he shifted his head, his arms and his gloves to the right, just enough to signal to Stemkowski that he would turn behind the net. Stemkowski shifted his weight to follow him. Then Laperriere dug his skateblades into the ice and turned the other way. When he reached centre ice, he lifted the puck over the Leafs defencemen into their end, timing his shot so that the three Canadiens forwards could burst over the blue line together without breaking stride.

Claude Larose swept toward the goal, grazed the puck with his stick and sped past Terry Sawchuk so fast that the crouching goalie felt a cool breeze through the eyeholes of his facemask. Sawchuk couldn’t see John Ferguson barrelling from his blind side toward the goal, but he could hear Ferguson coming, because the Canadiens forward skated as if he was chopping onions with his feet. Ferguson stormed past the goalie and followed Ralph Backstrom and Bob Pulford, the Leafs winger, into the corner.

The puck skittered toward the face-off circle, and Sawchuk watched his defencemen, Larry Hillman and Marcel Pronovost, skating to retrieve it. Sawchuk, Hillman and Pronovost had all played their first games in the NHL as teenagers with the Red Wings in Detroit. Hillman had joined the Red Wings at seventeen and was still the youngest player ever to have his name engraved on the Stanley Cup. Pronovost was the most popular French Canadian in the NHL who didn’t play for the Canadiens. Before a game between the Canadiens and the Red Wings at the Montreal Forum, the fans had helped him celebrate his thirtieth birthday by presenting him with a new car. Pronovost had also broken his nose fourteen times and now looked as if he was squishing his face against a pane of glass.

Pete Stemkowski took the puck and turned in front of Sawchuk. The puck was rolling on its edge. He looked down at the puck as Larose lowered his shoulder to ram it like a piledriver into his head. In the split second before this happened, Stemkowski leaned to his left, angled his weight onto his inside foot, glanced up the ice and made a pass that landed right on the stick of Jim Pappin, who was skating away from him at twenty miles an hour. While Stemkowski avoided Larose’s shoulder, Pappin felt the puck on his stick without looking down at the ice and kept skating.

Stemkowski had made similar passes so many times throughout his career that no one paid much attention anymore. Certainly he no longer impressed his coach. Punch Imlach had said more than once in the last couple of years that Stemkowski was “a stupid hockey player.”

Pappin slapped the puck into the Canadiens’ end. Terry Harper skated in to retrieve it. “You got time,” Worsley yelled at him. “You got time.”

A moment later, three players kicked at the puck against the boards. When it disappeared within a maze of skateblades, John Ashley blew his whistle to stop the play. Thirty seconds had passed since the game had begun.

Ferguson, Backstrom and Larose left the ice. Despite his French-Canadian surname, Rosey had grown up in Ontario, in a whistle stop north of Lake Superior called Hearst, the Moose Capital of Canada. Since joining the Canadiens, he’d worked hard to prove to them that he deserved his place on the team. But they still had reservations about Larose. So did his mother in Hearst. She worried that her son would get hurt, and she wished he’d never played hockey at all.

Jean Beliveau, Gilles Tremblay and Bobby Rousseau skated from the Canadiens’ bench to replace them. Laperriere and Harper stayed on the ice.

From the Leafs’ bench, Punch Imlach sent Dave Keon, George Armstrong and Frank Mahovlich onto the ice, along with two fresh defencemen, Tim Horton and Allan Stanley. Of the five Maple Leafs on the ice at the moment, Imlach had the least confidence in Mahovlich. He hoped the son of a bitch wouldn’t let him down.

“Take a fucking look,” Jim Pappin snapped to Bob Pulford as he slid along the Leafs’ bench. “I was open.”

Pulford rested his gloved right hand on top of the boards as he caught his breath. “Y’re open, lemme know, fucksake,” he said.

Gibberish came out of Pulford’s mouth like porridge bubbling in a pot. “Pulford was always mumbling,” said former NHL referee Bruce Hood. Pulford was always miserable, as well. His teammates had seldom seen him smile, even when he scored a goal. Over beers in a bar, they joked that Happy Hour couldn’t start until Pulford went home. But they’d seen him argue. Pulford argued with the other team. He argued with his own team. He argued with the officials. He challenged every penalty, every offside. Some officials expected him to argue even when he scored a goal. “A most miserable player,” said Hood.

Pappin and Pulford both lived in Weston, northwest of the city. They often drove together to practice at Maple Leaf Gardens, and they shopped together at the same grocery store, where Pappin picked up baby food for his new kid. But during a game, they bickered like romantically challenged parents. “On the ice,” said Stemkowski, their linemate, “they didn’t get along so well.”

Pappin was as miserable as Pulford. Lean and moody, with a chip on each shoulder, he had an abrasive personality that could scour a frying pan, and he didn’t play favourites with his criticism. He said stuff about his coaches and teammates that they didn’t like to hear, and he said it right to their faces. “Pappin had the most cutting tongue of any person I’ve ever met,” said Don Cherry, “cruel and to the point.”

Pappin called the coterie of Leafs players who followed Punch Imlach the Punch Platoon, Punch Drunks or Imlach Lackeys. But as often as he criticized others, he turned his caustic eye inward. “He gets down on himself a lot,” Stemkowski said.

For eight years as a professional hockey player, Pappin had spent countless hours on a bus, travelling with his minor-league teammates between small-time cities like Cleveland, Providence and Rochester. Occasionally, Punch Imlach would call him up to play a game or two with the Leafs, then send him back to Rochester. He did this two or three times a year. At the beginning of this season, with his wife, Karen, pregnant with their second child, Pappin figured he’d had enough. “Either I make it this time or I quit,” he’d said.

Pappin’s life had improved since he’d started playing this year with Pulford and Stemkowski. He’d scored fifteen goals in the last twenty-two games of the season and another six in the playoffs. He now led the Leafs in scoring. Less than a week ago, his wife had given birth to a baby girl. Maybe life wasn’t so bad after all.

Like Pappin, Stemkowski had commuted back and forth to Rochester from Toronto like a travelling salesman for Kodak cameras. This year, his third as a professional, he’d finally stayed with the Leafs for a full season, but that didn’t give him much reassurance. Until about three months ago, Stemkowski had spent most games sitting on the bench. Now he’d earned a regular shift on a line that scored goals, and he tried hard to make the most of his opportunity. Lately, even Punch Imlach had admitted that Stemkowski made some good plays, although he was too slow.

Bruce McDougall has been a freelance writer for more than 25 years. He has written or co-written sixteen non-fiction books, including biographies of Charles Mair, the Canadian poet; John Wilson Murray, Canada’s first detective; and Ted Rogers. He has published essays in The Antigonish Review and short stories in Geist, subTerrain and Scrivener. His non-fiction novel, The Last Hockey Game, will be published in 2014 by Goose Lane Editions. He is a graduate of Harvard College, where he was an editor of The Harvard Lampoon, and attended the University of Toronto Law School before becoming a full-time writer. He lives in Toronto.