Poems that mine Newfoundland’s culture 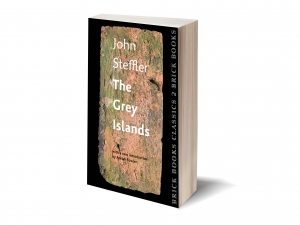 Despite being a mainlander, Steffler captures the spirit and ruggedness of the place like an islander.

A place known world-round as The Rock, Steffler’s in-depth mining of Newfoundland’s unique culture and heritage is both truthful and fabricated, a tightrope of myth and memory. He toys with Newfoundland’s lyrical dialect, and embodies the windswept coastal weather and isolation.

Steffler understood Newfoundland, its ruggedness, wildness, and untameable landscape. At the very core of  The Grey Islands  isn’t cartography of its geography, but a portrait of its people, who are as rare and remarkable as the island where they dwell.

Shannon Webb-Campbell is a mixed Indigenous (Mi’kmaq) settler poet, writer, and critic. Her books include: Still No Word (Breakwater 2015), the recipient of Eagle Canada’s Out in Print Award, and I Am A Body of Land (Book*hug 2018). Shannon holds a MFA in Creative Writing from University of British Columbia, and is currently completing a MA in English Literature at Memorial University of Newfoundland and Labrador. She is the editor of Visual Arts News Magazine, and currently lives in Montreal.