The Evolution of the Graphic Novel

The concept of a “graphic novel” has come a long way from its modern-era origins as bound collections of previously published comic books. Many people unfamiliar with the form automatically dismiss it altogether as being cartoons and nothing further (as if cartoons weren’t an art form all their own).

Yet, it’s perfectly understandable that in the age of superheroes–which we do appear to be in, pop culture-wise–the near-ubiquitous compilations of unitarded crimefighters lining bookstore shelves might signal to the uninitiated that the genre is the sole realm of caped crusaders and cartoonish supervillains.

While there still exist plenty of examples of such, more and more authors and artists have come to view the form as a new and exciting method of presenting long-form narratives in unique, often startling ways. Recent examples such as Jeff Lemire’s Essex County, Chester Brown’s Louis Riel, and Mariko Tamaki’s Skim, among many others, have taken the form to brave new heights, combining intimate narratives with stellar artwork to proffer stories and ideas that are as far from the stereotypical “comic book.”

Mathew Reichertz’s Garbage may serve as an evolution of the genre, a bridge between what we conventionally accept as a “graphic novel” and what we customarily understand as an “art exhibit.” As Robin Metcalfe, Director/Curator, Saint Mary’s University Art Gallery, writes in her accompanying essay, “An art gallery can hardly compete [with a graphic novel] … Our ideal of the white cube, where the viewer’s encounter with the artwork is isolated from all distractions, remains illusory, its emptiness contaminated by electrical outlets and baseboards and exit signs … It is precisely the intimate scale of the book that allows the reader to detach its imaginative universe … from the world that goes about its business beyond the edges of the page.” 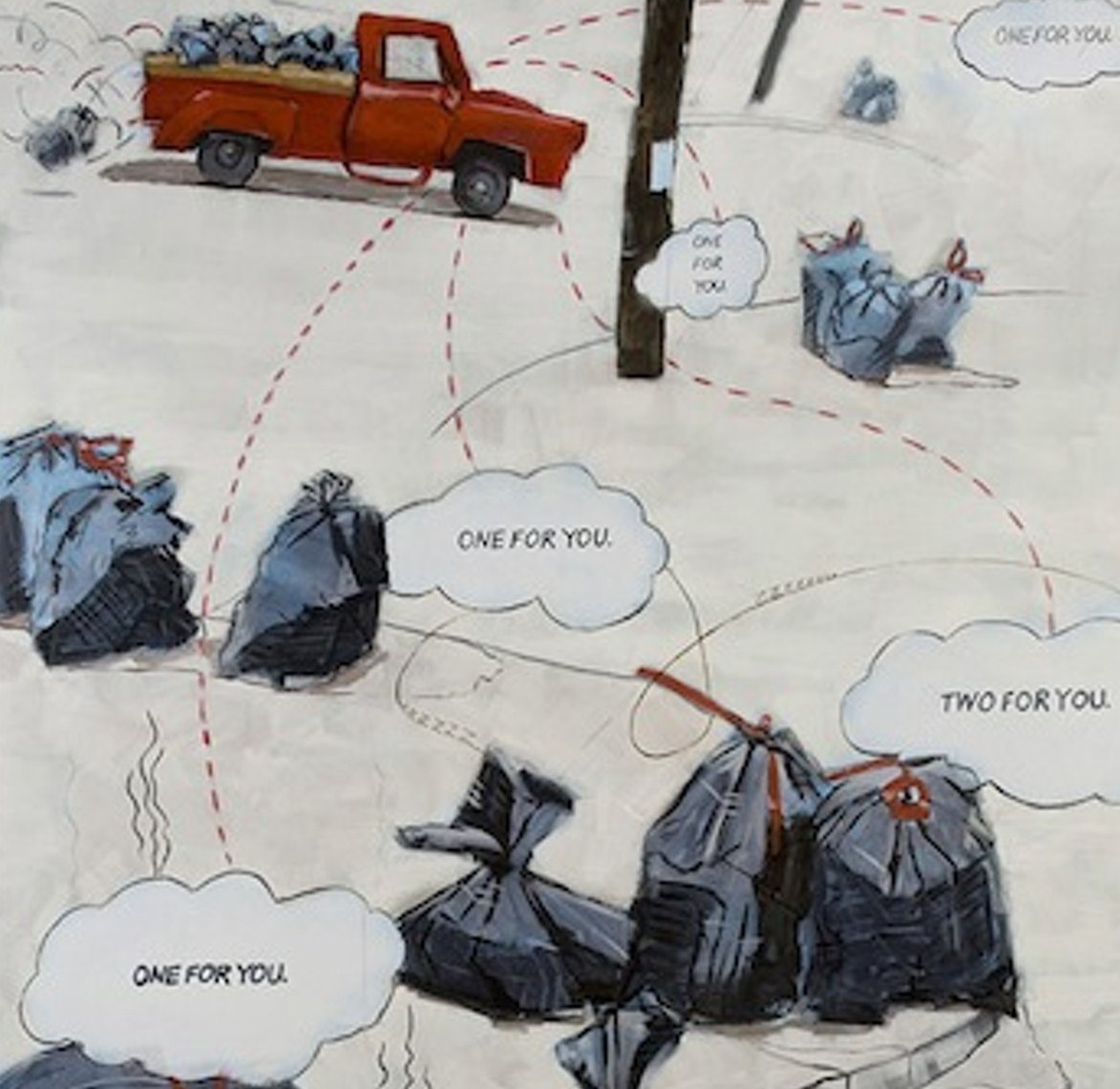 Garbage began life as an art installation, and Reichertz—a teacher of narrative painting at the Nova Scotia College of Art and Design—designed his artwork to be, first and foremost, an exhibit piece for a physical space. Through the paintings that make up Garbage, Reichertz tweaks the artistic tropes of the comic book to ultimately present a fractured narrative. Rectangular panel outlines, speech balloons, a linear progression of images through a left-to-right deployment: all are used to set Garbage up as a comic book writ large, its panels stretching across walls instead of pages.

Garbage the book, then, is the next logical step for such an exhibit; an exhibition catalogue of a series of paintings that toy with the motifs of the graphic novel, now presented in graphic novel form. Ostensibly the tale of a man attempting to rid himself of a discarded couch that has turned up in front of his house, Reichertz both embraces and subverts the forms of comic books and art installations in his presentation, ultimately resulting in, as Metcalfe puts it, “a fresh conversation between various ways of telling a story.”

Reichertz’s works, at once realistic and fantastical, combine elements of realism, myth, and comic books to result in a weird and often unsettling examination of one man’s conception of the world around him. Only the man himself, his partner, and his dog are presented as recognizable beings: the neighbour with whom he discusses the mysterious couch is a pixelated blur; another neighbour has the head of a hyena; and an unknown woman appears with a head of living flame. As the panels progress, they begin to lose their two-dimensional cohesiveness, the images bursting through the panel walls before foregoing them altogether. The introduction of the couch — this unexpected obstruction within one man’s ordered universe — results in the figurative dismantling of his worldview and the literal dismantling of the format that contains him. As a narrative, it’s deceptively simple, but Reichertz’s intent is not so much to tell as story as it is to examine and then up-end and subvert what it is we expect of the form.

So is Garbage a graphic novel, an exhibition catalogue, or something else altogether? Benjamin Woo—comics academic, and Assistant Professor at the School of Journalism and Communication at Carleton University—posits in his introduction that, while once “comics and fine art were mutually exclusive categories … Garbage is different. Equally at home in the art world and the comics world, it uses and refuses the conventions of graphic novels. Garbage is both art and “Art,” just as it is and isn’t comics.”