The Effect of Frost on Southern Vines: From the Cozy to the Macabre 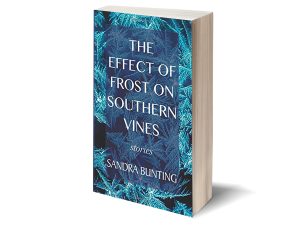 The first collection of short stories from award-winning poet Sandra Bunting spans the realm of cozy to the unusual and macabre. Her tales take readers across Ireland and to France, Cuba, Louisiana and other locales–a reflection of the New Brunswicker’s own extensive travels and homes. While some excerpts of the book could use some polishing, almost all of the stories in The Effect of Frost on Southern Vines entice from the start.

Intriguing descriptions are found throughout the anthology. The reader can easily envision the vibrant blues and the fabrics blowing in the breeze in “Caribbean Blue,” the natural hues of the bog in “Gorse Flies” and the “carnivorous” Spanish moss in the book’s title story.

Intricate details of daily life present themselves in cases like from “The Corner House”:

‘The bishop’s man is here to collect for the new church again,’ they whispered. Neighbours, sitting out to catch a few rays of sunshine before turning to their chores again, gathered up their chairs…No one ventured out until they were certain the danger had passed.

Bunting has created some compelling characters, especially Tracy from “Getting Lost,” who is as determined as she is damaged, and who everyone is drawn to despite her secret wounds. Bunting, at times, also reveals her sense of humour, such as in “For a Song” when Weasie–the quirky, long lost cousin–welcomes young Brooke into her home:

‘To your stay with us.’ [Brooke] looked around vaguely to see who else made up the ‘us’ Weasie had mentioned and took a sip of the drink.

Unfortunately the book has cases of telling rather than showing (“Julia’s imagination ran away with her” or “The local fire department worked hard to put out the fire,” for example.) Also, several of the stories end in the most extreme possible way or with a predictable rom-com-style finale.

But the lasting impression of The Effect of Frost on Southern Vines is that it is a collection of short stories with unique story lines that are quickly consumed; like of a woman trying to save her marriage through dancing for CCTV, of young Irish Traveller teens trying to save nearly mauled-to-death animals or of a war veteran living outside of a zoo.