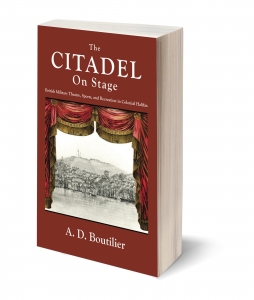 In 1825 a Halifax Turf Club was established and races were held on the common the last week of every August for twenty years. In 1827, a cocked-hat sweepstakes for untrained horses was added to the programme, for which no handicap was required, and this heightened the excitement. In England, however, it was contrary to regulations for “a labourer to make a race”, so it followed that in Halifax only gentlemen riders and owners were permitted to enter races, including the cocked-hat sweepstakes in which the rider was required to wear a three cornered hat (tricorne). An interesting incident occurred during the 1829 races, which showed that a commoner was not a welcome rider at a gentleman’s sport. A rough-looking jockey with a long blue coat and a straw hat folded and pinned at the sides – a substitute cocked-hat – entered the sweepstakes. The homespun rider beat two gentlemen to the pleasure of the crowd. This was no more than a laughable prank, but the club didn’t find it amusing and advertisements for the following year’s cocked-hat sweepstakes contained stiffer rules: an eight dollar entrance fee, and only horses that were the property of the Halifax Turf Club were eligible to compete. There would be no more shouts of “Bravo, Straw Hat” causing embarrassment to gentlemen riders (p.248).

During the early years of horse racing on the common New Brunswick horses were setting track records, and the Halifax Turf Club was losing face as well as money. By 1836 it became obvious that the club had to redress its situation if it wanted to seriously compete and stay in the game. When the legislature sat in February the members went into discussion concerning a proposition put forward by James Boyle Uniacke for a grant of money to import horses for the province, and several members expressed their opinion as to the most suitable breed. John Young, a native of Scotland, a Reformer, and a man who, while looking up at another would at the same time cut him off at the knees, stated that he was in favour of horses for farming purposes, of which he was considered a good judge. Uniacke, a Tory, who was now president of the turf club, owned a stud farm and highly recommended the importation of thoroughbreds. Uniacke had a sarcastic wit and loved a timely joke, and in his remarks he scoffed at the truck horses kept by Mr. Young on his farm known as Willow Park, which were sometimes employed in driving agricultural produce to market. He then made a sly allusion comparing Mr. Young to his cabbages, which brought convulsive chuckling from the members. Now, Mrs. Uniacke, the daughter of wealthy merchant John Black, was a lady possessed of a large fortune at the time of her marriage to James in 1832, but, unluckily, she was not very attractive; and when the chuckling stopped, Mr. Young, who had been sitting there taking it all in as if witnessing a play, rose to reply, and with an omniscient smile on his face declared, “We, in Scotland, Mr. Speaker, select our horses upon the same principle that some gentlemen select their wives, not for their beauty, but for their sterling worth.” The Reformers and the Tories eyed one another and then the house shook its sides and dissolved into laughter. The debate was over, the proposition died on the floor, there were titters for a month: it was a good jest forever (p. 249-50).

Alex D. Boutilier was born in Sydney Mines, Cape Breton during WWII. He has a keen interest in the culture, customs, and traditions of diverse societies and also loves studying, researching and writing social history, which he finds highly informative, and suggests that it can also be “unexpectedly hilarious” at times.