The Brothers Wolffe From Everything Is So Political 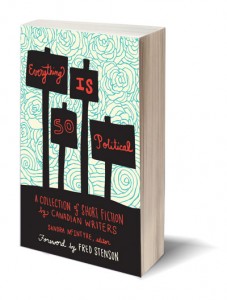 I shouldn’t have minded that George sat down beside me at Carla’s party. I shouldn’t have cared that he’s different. If my mother had been here, she would have disapproved of my irritation. It doesn’t matter, she would have insisted, skin, fur, fish scales, feathers, who cares? But it did matter. Everyone stopped dancing and stared, and I hate it when people stare. I gazed out of the window with a preoccupied air as though ruminating some complex philosophical conundrum, hoping George would take the hint and go away. Carla scowled at me, deep vertical lines pinched between tented eyebrows, red lips sucked in tight. Did she think I’d invited George? I shook my head—discreetly—to tell her: no, no way, not me, are you crazy?

And then there stood George’s brother Mike, a vision in white fur, framed in the doorway, nose twitching, eyes flickering around the room. Poor Carla. She looked ready to burst into tears. I sympathized, I wouldn’t want it known that the Wolffe brothers had come to my party either.

Without greeting anyone (what would be the point, who would have responded?), Mike stalked, stiff legged, through the throbbing music and placed his haunches on the arm of the sofa beside my shoulder, on the other side from George. Jen, Barb and Ellis snickered, relieved they hadn’t been the ones who’d had to sit down because their shoes pinched so badly. I transferred my gaze to the carpet, counting the holes that had been left in it by generations of smoking pre-Carla tenants, trying to breathe through my mouth.

Hi, said George. I couldn’t look into his face. It wasn’t that he was ugly, but he didn’t, well, he didn’t look right. If my mother were here she’d have hissed to me that I had the sensitivity of a stoat, didn’t I see how uncomfortable I was making him? It’s not about what someone looks like, my mother likes to say, it’s about what’s inside—that’s what counts. I shouldn’t have minded. But I did. I was sorry of course that everyone stared at the brothers and made jokes at their expense. About the size of their noses, the hairiness of their legs, and above all, about the way they smelled. As long as I wasn’t personally involved I had no problem with them carrying on their lives however they liked. But if “however they liked” involved me, then…

I jumped to my feet. Hey, Jen, I called. Jen pointed to her empty glass and slipped out of the room.

Wanna dance? George’s low growl—or perhaps it was Mike’s—was not threatening but it made the hairs on my arms stand on end.

Silky white fur slipped over my skin as George draped an arm around my shoulders. Beneath the fur, bone, and sinew. He moved in a most peculiar way, knees jerking high, elbows wide, snout lifting and mouth pulling forward into a little round “o”. His movements had nothing to do with the rhythm of the music on Carla’s sound system. Mike crouched, belly low to the carpet, then leaped, twisting in the air as he kicked up his legs high behind him. George swept me up, tossed me to Mike. Face buried in fur, I breathed in the manky smell of the Wolffe brothers. Then I was crouching too.

My friends stared and shrank back against the walls as the three of us hurtled around the room, yapping and howling, tumbling on the holey carpet, springing up onto the back of the sofa, onto the window sill, the coffee table, the bookcase. Now I’d caught the rhythm that the brothers were dancing to: Of bright sun-glanced glaciers, of darting fish and green pebbled stream-beds, of pines and, beneath their bark, slow-seeping resin.

We stood on the carpet, panting. Well, that was fun, said George, leading me back to the sofa. We sat down, George on one side, Mike on the other. I stared at George, then at Mike, into those black-rimmed blue eyes. A flash of light. Carla rushed for a dustpan and brush. The bulb in the lamp beside the TV had exploded. That could only mean one thing: I was in love. The tip of George’s white tail entwined itself around my calf, Mike’s nestled in my elbow. Oh no, the tails. I’d forgotten the tails. They shouldn’t have mattered, I know, but they did.

Short story The Brothers Wolffe by Susi Lovell
from Everything is so Political
edited by Sandra McIntyre
$19.95, paperback, 200 pp.
Roseway Publishing, May 2013

Originally from England, Susi Lovell lived and worked in Austria, Colombia, South Africa, and Australia before settling in Canada. She started writing fiction after a lifetime of dance and choreography. Her short stories have appeared in Grain, The Fiddlehead, carte blanche, Kudzu Review, Blue Lake Review and other literary journals as well as in the anthology Everything Is So Political. She has an M.F.A. in Creative Writing from Lesley University, MA, an M.A. in Contemporary Dance from the Université du Québec à Montréal, and a B.A. in German Language and Literature from the University of Toronto.