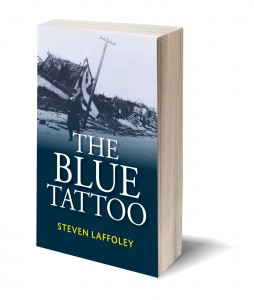 Pilot Francis Mackey, who had prepared the Mont Blanc for entrance into the harbour, pulled up anchor near McNab’s sometime around 7:30 a.m. When all was readied, he followed an American freighter through the now opened submarine net toward the Basin. As he stood on the bridge next to Captain LeMedec, he felt a growing anxiety as he thought about the cargo aboard and wanted to make Bedford Basin as quickly, and safely, as possible.

His anxiety was heightened by the communication challenges. When he wanted a change in speed or direction, he would first tell LeMedec, who would then pass the order to the crew in French. That delay unnerved Mackey, and he kept a wary eye as they passed close to George’s Island, its old stone peeking out above the browned grass.

Looking forward again, Mackey saw the anchored H.M.S. Highflyer and ordered that the Mont Blanc offer the appropriate flag salute. The order was passed along in French, and Mackey nodded as they passed the ship. When he turned his attention back to the channel ahead of them, he noticed four masts rising above the outcrop of land.

On the Imo, Captain From and Pilot Hayes now found themselves facing another ship moving quickly toward them – the Stella Maris, a 120-foot tug, pulling two scows filled with stones toward the Basin. When its captain, Walter Brannen, caught sight of the Imo, he had little time to respond. He knew the Imo was too large and too high in the water to react quickly and he would not be able to move his ship and cargo toward the Dartmouth shore, so he ordered the Stella Maris to turn toward the Halifax side. This kept the Imo closer to the Dartmouth shore. As the Imo passed the Stella Maris, Hayes suddenly became aware of yet another ship moving toward them.

It was the Mont Blanc.

On the Mont Blanc, Mackey watched the Imo come into view. It was perhaps three-quarters of a mile ahead of them, sailing in the Dartmouth side of the channel. What in God’s name is that ship doing in my channel, he thought. Immediately, he pulled on the ship’s horn, offering one blast. He heard two short horn blasts in response from the Imo – Hayes was intending to stay in her lane, close to Dartmouth. Mackey began shaking his head. “No, no, no …,” he said under his breath.

Captain LeMedec understood what was happening, and he was uncertain whether he should give orders to the crew or wait for Mackey’s.

For a moment, everyone froze.

Captain From, aboard the Imo, now ordered his ship to move further toward the Dartmouth side. Mackey again signalled with a one-horn blast. The Mont Blanc would continue through the Dartmouth side of the channel, and it moved even closer to shore. Mackey could almost feel the shore rocks sliding beneath the hull of the ship.

At the same time, just above the Narrows, in Richmond, local ferryman Charles Duggan watched the unfolding scene from his living room on Hanover Street. Two ships, from what he could tell, were fast approaching each other on the Dartmouth side of the Narrows. He had seen collisions before and knew how serious they could be. As he watched, his wife Reta joined him at the window, cradling their four-month-old boy, Warren, who slept soundly. They were transfixed by what they saw.

Neither ship gave any indication of turning away.

On board the Mont Blanc, Mackey watched the Imo, which again signalled two horn blasts, staying the course. Mackey shook his head. LeMedec and Mackey began barking orders at the crew in unison. Confusion arose. Mackey signalled two horn blasts, while LeMedec ordered the crew to turn the ship to cut across the bow of the oncoming Imo. Meantime, Mackey ordered that the engines be cut, and for a frozen moment, the two ships were strangely parallel.

Aboard the Imo, Captain From ordered his ship full speed astern. But because she was riding high in the water, the transverse thrust of the Imo’s twenty-foot propeller swung her to the right, straight into the path of the Mont Blanc.

A collision was now inevitable.

In a desperate attempt to keep hold number two – the one containing the TNT – from being struck head on, LeMedec ordered the Mont Blanc to turn itself further. But like the fired bullet hurtling at Archduke Ferdinand three years earlier, the momentum of history stole away the remaining human agency. At 8:45 a.m., the Imo’s bow swung to the right and cut an ugly gash into the bow of the Mont Blanc along her starboard side. Though the Imo had just missed hold number two, she struck hard at hold number one, containing the barrels of picric acid.

A moment later, they ignited a fire.

Captain LeMedec knew that nothing would save the Mont Blanc now. He calmly ordered his crew to the lifeboats. They must abandon ship.

Once Charles Duggan saw the collision, he knew he must help. He kissed his wife and left. As he raced down the street, he glanced back at Reta, seeing his son cradled quietly in her arms, then turned and hurried down the hill to the dock where he kept his boat, the Grace Darling. As he ran, he noted his neighbours gathering outside on their lawns and at their windows, all watching the unfolding event.

He sprinted across the tracks to the docks. When he reached his boat, a one-ton 36-footer, he untied the mooring. As quickly as he could, he leapt on board and started the engine. He pushed the throttle forward and swung the boat out into the Narrows, heading straight for the Mont Blanc, now sitting almost still in the water, stunned by the wound she had just received.

Meanwhile, the Imo’s momentum kept her moving and for another moment the two ships were parallel again. The Mont Blanc then began drifting west, toward pier six on the Halifax shore. Dark smoke began rising from her deck. The Imo drifted almost perpendicular to the harbour’s mouth, before turning and moving east toward the Dartmouth shore. Captain From regained control and turned the ship south again, toward George’s Island. But the attention of the crew was now on the Mont Blanc as the smoke from the deck grew in size.

From his boat, Charles Duggan watched with growing apprehension as he approached the Mont Blanc. He saw her crew assembled on deck, filling then lowering the lifeboats into the cold harbour water. Those who had already reached the water were rowing quickly away from the ship toward the Dartmouth shore.

Eight-year-old Mary Shepherd had started walking to the Roome Street School when she saw the smoke rising in the harbour. Always a curious girl, she turned away from the road and walked toward the waterfront. She was amused by the adults she passed, staring open-mouthed into the harbour at the burning ship. They paid no attention to young Mary as she continued toward the shore, drawn by the flames she found most interesting, with the fast-changing colours of yellow and green wrapped in billowing, black smoke.

She skipped playfully across the tracks, jumping from one rail to the other, as the Mont Blanc drifted ever closer toward the shore. When she reached the water, she placed her satchel on the ground next to her and sat on the flat of a large rock, a few feet from the water. She brushed the dust from her red coat and lifted her feet to admire her black boots. She glanced over her shoulder to see if others had come down to the water to watch, too, but the people she could see were now walking or running away. She shrugged and turned back to see the ship, now so close that she could almost feel the heat coming from the flames on the deck. She cocked her head to the side, a lock of her brown hair falling across her face, and she wondered if someone would soon come to put the fire out.

It certainly was pretty, she thought.

By the time Charles Duggan got halfway to the Mont Blanc, the ship was fully on fire. When he could feel the heat of the flames, he began to feel a rising sense of fear. He could do nothing now. The danger was too great. He cut his engine, uncertain if anyone was still aboard, and turned his boat. He watched as crew members rowed away. That’s when he heard the first explosion. He turned toward the ship and watched as barrels from the forward deck lifted like popcorn with a second, and then a third, explosion.

Duggan started his engine again and turned his boat toward the Dartmouth shore. He pushed the throttle to full. Another explosion came, followed by yet another – each made him jump. He leaned on the throttle as though he could coax a little more speed out of the Grace Darling, which whined with complaint at the demands. As he motored away, the flames on the deck of the Mont Blanc climbed even higher into the air, belching dark hellfire smoke. Duggan glanced back over his shoulder and saw what he swore were the eyes of Satan, two lurid spurts of flame rising skyward, chasing a monstrous cloud that rose two hundred feet or more into the air.

It was at that moment, beneath the unblinking green eyes of Satan, there came a thunderous howl.

Steven Laffoley is an award-winning Canadian author of creative non-fiction.