The Best Canadian Stories Must Be Some Good 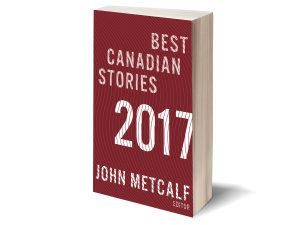 Toward the end of the calendar year, Biblioasis released its Best Canadian Stories 2017 collection, edited by short fiction tsar John Metcalf. With the title, the pedigree and Metcalf’s explicit indications that good work is objectively hard to find (“It was sometimes impossible to find ten good stories in the magazines in a given year”), one comes to such a book with high expectations.

The results are solid. But as with most short story collections, some of the stories were thrilling while others passed me by without great titillation. Perhaps the quality of a story is more subjective than an editor might think. Having said that, it’s not hard to understand why any given story was selected. Metcalf has sought out stories with “sparkling language [and] glorious rhetoric.” For the most part he’s succeeded.

Of particular interest to Atlantic Canadian readers may be the fact that six of the fourteen stories are from our people, including stories by Halifax and Fredericton’s Lisa Alward, Brooklyn Nova Scotia’s Martha Wilson, Newfoundland’s Lisa Moore, Halifax’s Alex Pugsley, Mahone Bay’s Beverly Shaw and Halifax’s David Huebert, who lives in Windsor now but we’ll still claim him as our own. Six of fourteen in a national collection is punching way beyond our weight, so back pats to us. What interests me, and perhaps what gives these stories much more than a regional appeal, is that they don’t deal with stereotypically Atlantic themes (you know, the fishing and the lighthouses, not that there’s anything wrong with that). They deal with more universal interests like aging love; pet ownership; the ethics of competitive salesmanship; the mess and blood of sex, birth and dying; like, partying teenaged-girl angst (okay that one is neither east coast nor universal); and the tendency of loneliness to ruin solitude. The setting may be Atlantic but rarely is it that obvious or important. This is not to say stories clearly set on the crags of Peggy’s Cove or the streets of St. John’s can’t have universal appeal. They often do. But the Atlantic Canadian stories selected here are clearly contemporary.

There are two that particularly stand out: Huebert’s “Suture” and Moore’s “The Shoe Emporium.” Moore is a veteran novelist and short story writer, author of seven books and multi award winner. Huebert is the new kid on the block, winner of last year’s CBC short story contest and already acclaimed for his first collection, Peninsula Sinking. “The Shoe Emporium” comes on at a frenetic pace, but Moore never loses control of it. It’s just three diverse employees selling shoes in a mall, each trying to win a trip to Toronto by outselling the others. She masterfully twists the tropes of her characters, the charismatic sleaze, push-too-hard Type A and the hapless mourner. In a confined space there’s tension and resentment and sex and jealousy, with a surprise at the end. I was dizzy with it.

“Suture” is actually the final third of the long titular story from Peninsula Sinking, about three phases in a young man’s life, and his maturation from a guy who does crazy stunts to get attention from the cool kids to someone who, full of regrets and hopes, grapples with highly evolved intellectual and ethical conundrums and finds safety only in love. It stands just fine on its own and opens with this enticement: “Imagine it’s you facing the loss of the still-ripening cherries between your legs.” This story is very much set in the Halifax of the 90s (“swimming [in the harbour] among the tiny jellyfish and the tampon applicators”) to today. Huebert proves himself a wizard with figurative, sensual writing, layering bizarre images with tricky turns of phrase. The ultimate insight is not so new, but we are reminded that “there were palm trees on Antarctica once.” Anything can happen.

Indeed, that is the joy of a short story, its ability to surprise us in such a short space. It can be thrilling, as are several of the stories in this collection.