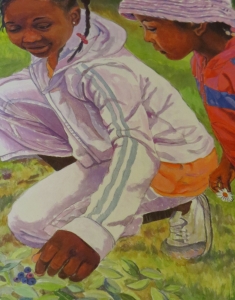 Shauntay Grant’s 2008 picture book, Up Home, is the Halifax-based writer’s thank you note to the community that helped her become who she is today.

Grant spent part of her childhood living in North Preston, a predominately African Nova Scotian community located in the Halifax Regional Municipality. She and her parents moved into Halifax when she was young, but Grant retains strong ties to the community through family and friends. It’s these connections she drew on upon in Up Home.

“Writing always starts from something you know or something you want to know,” says Grant. “I go to my memory and when I think of the times that brought me joy as a child, North Preston is there.”

Grant, who is also a spoken word artist and creative writing professor, says that without North Preston, she wouldn’t be the person she is today.

“The intention was just to write something to say thank you to the place that inspired me as a child to tell stories,” she says,” she says. “But for me, it ended up being a way to celebrate a community that had a huge part in shaping who I am as a person; my first recollection of music and art are from home.”

Initially, Grant wasn’t going to publish Up Home. She had written it as a teenager and was reciting the then poem at a Writers Federation of Nova Scotia event where it was heard by Sandra Macintyre. At the time, Macintyre was the managing editor for Nimbus Publishing.

“It really was Sandra hearing it and approaching me afterwards that led to the publication,” says Grant. “Things just sort of snowballed from there.”

As part of this snowball effect, Grant worked with artist Susan Tooke to help bring the stories and characters of Up Home to life. As part of their collaboration, Grant and Tooke visited North Preston to get a better sense of the people and places Grant referred to.

“I go about it in the same way you might do a movie; each illustration is a scene,” says Tooke. “You want to make sure you’ve got everything placed accurately, the right viewpoint, and you want to be able to get the proper landscape.”

Tooke isn’t from North Preston, so used this experience to better understand Grant’s connection to the community.

Grant also found taking Tooke to North Preston was important for their partnership to be successful.

“I don’t think our relationship happens often, where the writer works with the illustrator,” she says. “The opportunity to take Susan to the community, showing her around and meeting my family was instrumental in making the book happen the way it did.”

Each time, Grant and Tooke would spend a few hours meeting and interacting with community members before they set to work. However, due to the time of year, they ran into seasonal issues when creating a few of the scenes, like one that involved blueberry picking.

“It was black fly season and it was very foggy, so it wasn’t exactly ideal,” says Tooke. “When you see the image in the book, you think it’s a beautiful, sunny, warm day but it was something quite different.”

Tooke sometimes had to incorporate different faces into a drawing, such as those featured in the picture of the church choir. She found it challenging because she wanted each person to be equally represented.

“I wanted to make sure that I included every choir member and that everyone had their own identity so they could recognize themselves,” she says. “That was quite a challenge, but I was happy to do it.”

After all, Up Home is not only about celebrating the people that inspire Grant, but a place she is proud to call home.

“I love being able to look back at the book and see the faces of my community documented,” says Grant. “It’s beautiful to see.”

Up Home was Grant’s first book and was published in 2008. It was also the 2009 winner of the Best Atlantic Published Book Award.