Testament to a Remarkable Final Year of Life 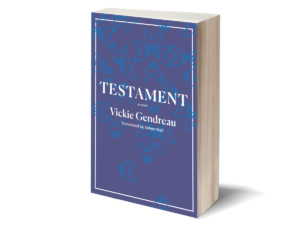 What do we make of the first English-language publication from a promising young author whose writing career has already ended? That’s the challenge we are faced with in Montrealer Vickie Gendreau’s Testament.

Written over the summer of 2012 after Gendreau was, at 23, diagnosed with an inoperable brain tumour, Testament saw its first French publication in fall 2012. Gendreau passed away in the spring of 2013, not before completing a second novel (thus far untranslated). BookThug’s publication is the first English translation of Testament, translated by Newfoundland author Aimee Wall.

An autofiction novel is part hospital chronicle, part will – imagined as a series of documents distributed to friends on USB drives after her death. Gendreau’s style is magic realism of that which is anything but magical: Dollarama, hospital corridors, bland mushed-up food.

“The end of a world. A world with her in it,” she writes.

Gendreau’s work draws comparisons to Nelly Arcan, another Québeçois writer working in Montreal’s sex industry and writing about death. And while Arcan fought depression and thoughts of suicide, both women shared the fact of being unable to escape their medical conditions. Though Gendreau’s work as a dancer underscores her story, as does sex work in Arcan’s novels, it’s a distant second to the overwhelming theme of mortality.

Elements of Testament carry a 23-year-old naivety: the somewhat superfluous images of dozens of fennec foxes, the fixation on phone battery charges, the lovelorn fawning over a useless-sounding ex-boyfriend. But this too can be read as a testament: Gendreau calls her own less lofty pursuits into question in the face of death, as though she is failing by not being in love, by making a Halloween costume while a friend was dying. We know, of course, that Gendreau was not failing: this book is testament to a remarkable final year.